Visit The RAREST Animal in the World | Ol Pejeta Conservancy 🦏 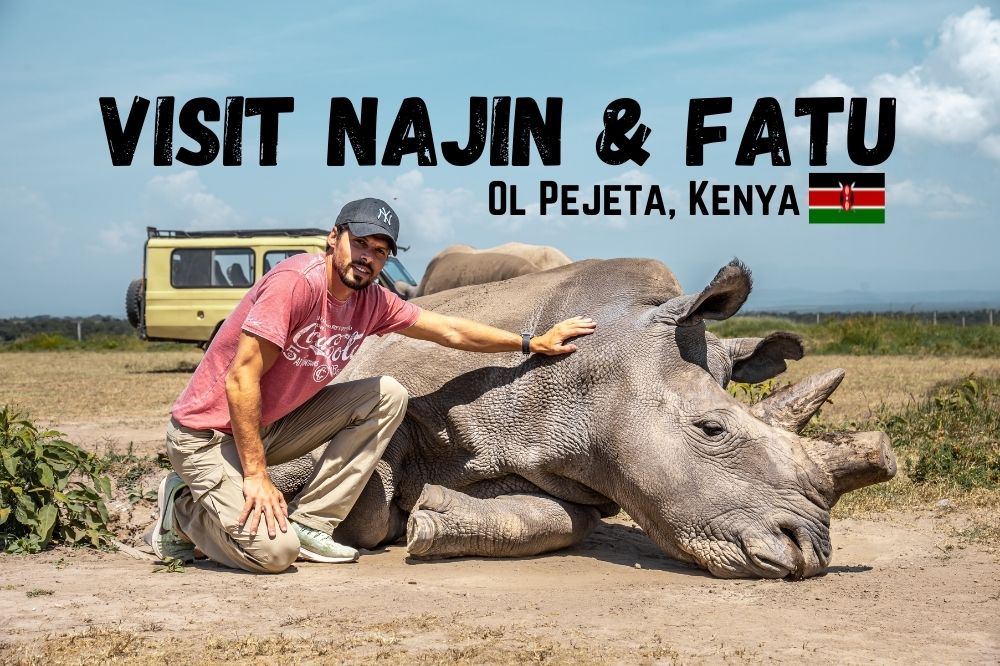 It saddens me deeply that due to human greed the Northern White Rhino is functionally extinct. Luckily, two of these amazing creatures are still alive and I got a chance to meet them in the Ol Pejeta Conservancy in Kenya and get up close and personal with them. One of the most unique travel experiences that actually hit me right in my heart!

My big overland trip in Africa got me some amazing adventures. I stayed all alone on an island in Lake Tanganyika, went on incredible safaris in Botswana and Namibia and saw the mountains gorillas in Uganda.

It sounds strange but my visit to Ol Pejeta to see the last two Northern White Rhinos on the planet was the easiest adventure of all of them, yet it was the most impressive one. I am saying easiest because this was not something specially set up for me or super expensive. 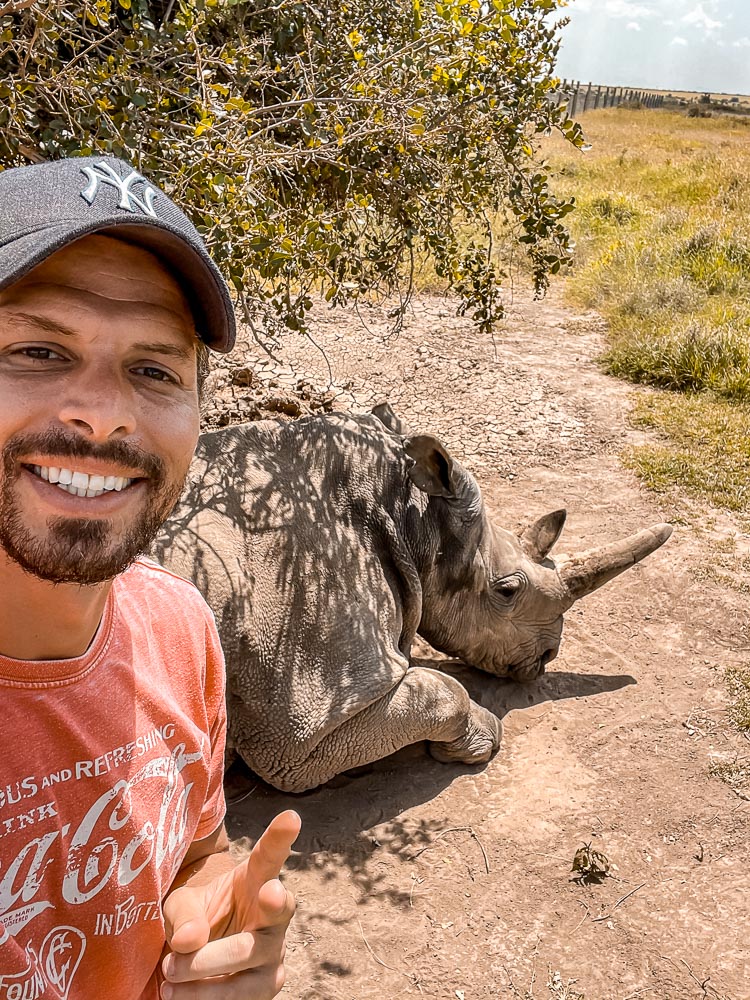 Although it is very unique to meet the last two northern white rhinos alive, this is something you can do too and it does NOT costs that much at all. I think it is even one of the best things to do in Kenya if you ask me, especially when you realize this unique experience only costs $60 USD.

Mexico
20 Amazing Places to Visit in Mexico in 2022

Mexico
Buying a Sim Card at Mexico City Airport in 2022

Mexico
What It’s Like To Travel To Mexico During COVID 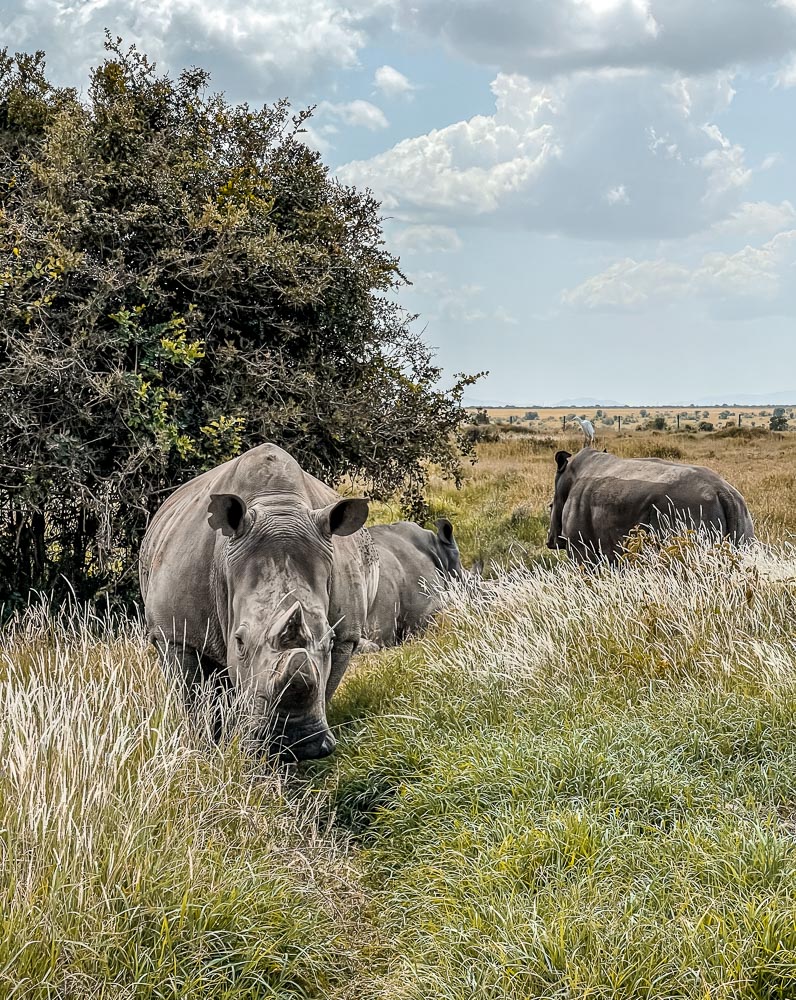 This sub-species was discovered in 1907 and by the time of 1960 there were about 2,000 Northern White Rhinos living in the wild. Their habitat was spread out over 4 countries: Uganda , South Sudan and Central African Republic.

Due to conflicts in the countries were the Northern White Rhino used to live there were only about 700 left by 1970. Ten years later only half of that number.

In 2009 four Northern White Rhinos were moved from a zoo in Czech Republic to the Ol Pejeta Conservancy: Sudan, Suni, Fatu and Najin.

In 2015 the last two Northern White Rhinos in captivity died as well in a zoos in San Diego and Czech Republic.

In 2018 Sudan, the last male Northern White Rhino died in Ol Pejeta and until this day there are only two northern white rhinos left in the world. Two females: Fatu and Najin. 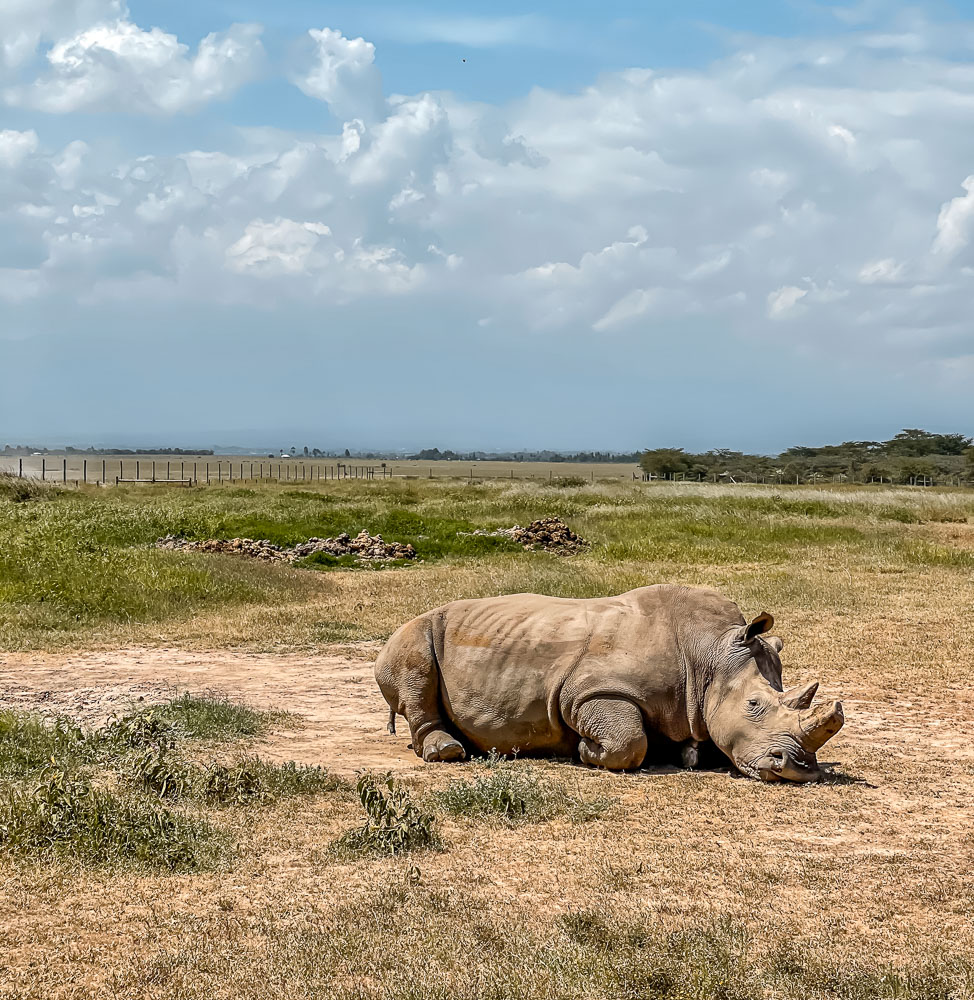 Without a doubt poaching is the number 1 reason the Northern White Rhino is almost completely extinct. In 2014 alone already more than 1,000 rhinos in Africa were killed for their horns.

So why is rhino horn so popular? MONEY! Their horn contains keratin like our nails and the price of 1 KG went in the last 10 years up from $3,000 USD to $60,000 USD. Given the fact that a rhino horn is about 10 KG, that makes a rhino worth more than HALF A MILLION dollar!

Therefore Ol Pejeta has just like many game reserves and national parks in Africa an anti poaching unit. Basically a whole military operation, with a security center, surveillance cameras, armed rangers, 24/7 patrolling squad and so on. And all this costs LOT OF MONEY and it is just to protect the rhino. 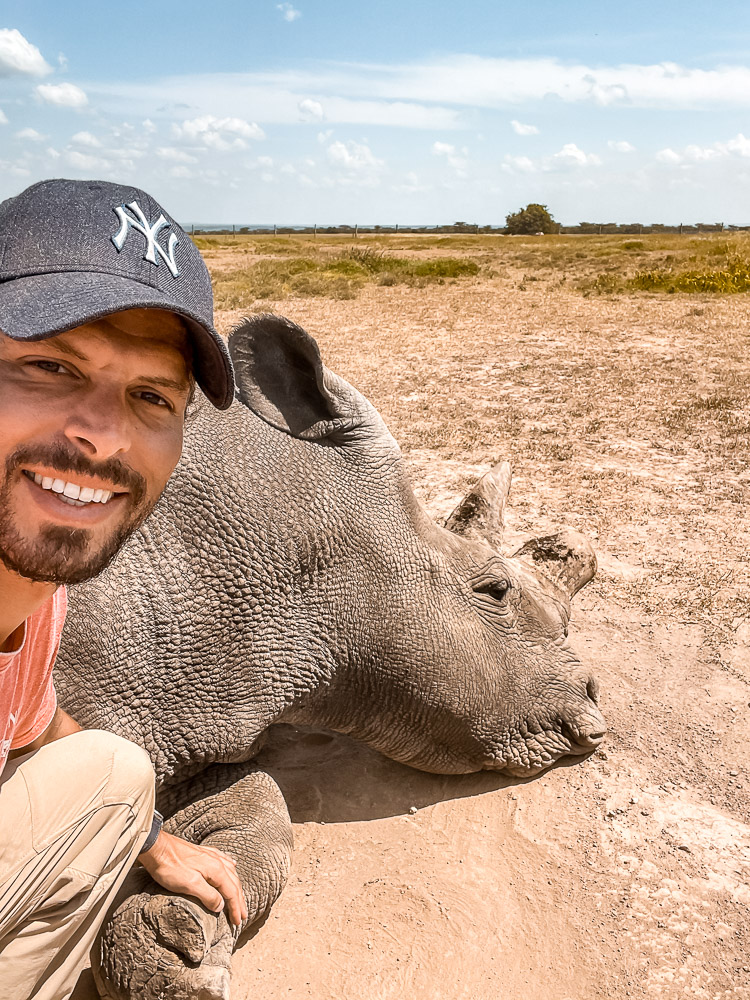 Sadly one of the last but very unorthodox methods in saving the rhinos in the wild is dehorning. A really awesome wildlife photographer I admire is Marlon Dutoit, he lately posted the video below on his Instagram account showing the dehorning of a wild rhino. It is heartbreaking, but sadly it is needed to save the wild rhino.

Unfortunately on March 19th 2018 the last male white rhino in the world died of natural causes in Ol Pejeta, which made the white rhino functionally extinct. His name was Sudan, named after the place where he was born in 1973: Shambe National Park, nowadays South Sudan.

The death of Sudan was a shock for the whole world! Although human greed made it come this far and there was little hope for the northern whites, Sudan was world news and made the headlines in every country. But it was too late!

RELATED: Ultimate Kenya Itinerary for 10 days & Best Things To Do in Kenya!

There is still hope the northern white rhino can be saved from complete extinction. At the moment there are projects ongoing with IVF and a surrogate Southern White Rhino mother. Very complex, but it is the last chance for the Northern White Rhino.

Ol Pejeta Conservancy has collected semen over the years and already created 9 white rhino embryos successfully. Because of the global pandemic the project has been postponed, but before the end of 2021 they will have attempted to place an embryo in the Southern White Rhino surrogate mother. 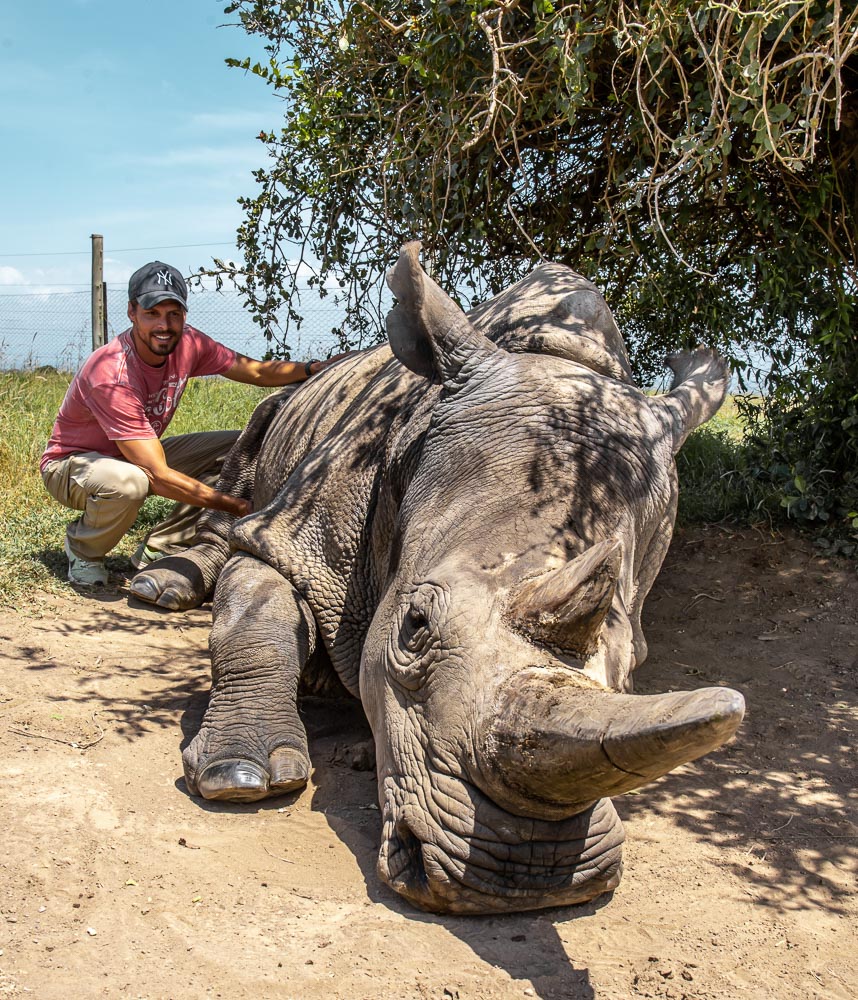 There are many ways to contribute to saving the northern white rhino, but more about that later. The coolest thing is to actually pay them a visit. You just gotta travel to Kenya and visit the Ol Pejeta Conservancy and then you can just like meet the two last northern white rhinos in the world.

Once you enter Ol Pejeta Conservancy you can make your own way to the enclosed rhino sanctuary called Morani. It is all the way in the east side of the park. In Morani you will find a restaurant, an information center and the rhino care takers that can take you into the rhino enclosure. 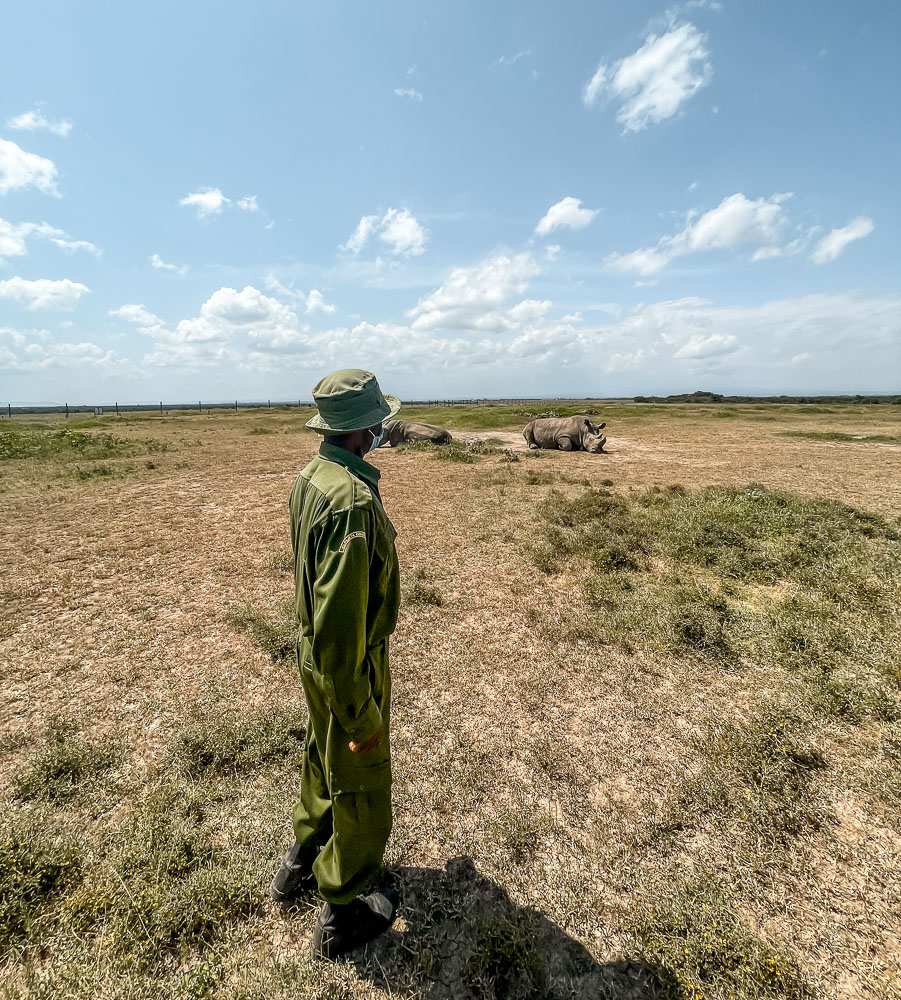 Just listen closely to their instructions and you will have an amazing experience.

Kneeling down next to the rhinos was a heavy thing. I suddenly realized I sat next to the world’s rarest animal. Only two left of them! It fell heavy on me… But another absolutely amazing travel adventure added to my long list and a memory for lifetime!

Ol Pejeta started an adoption program with Helping Rhinos to raise money for the conservation of the last two Northern White Rhinos on the planet. You can adopt either Fatu or Najin. Click here to go to the Helping Rhinos website for more details about the Rhino Adoption Program.

In case you want more information about the Ol Pejeta Conservancy then click on the link to go to their website.

Thank you for following my adventures around the world and my journey to every country in the world. For daily videos of my travels please have a look at my Instagram account @traveltomtom. 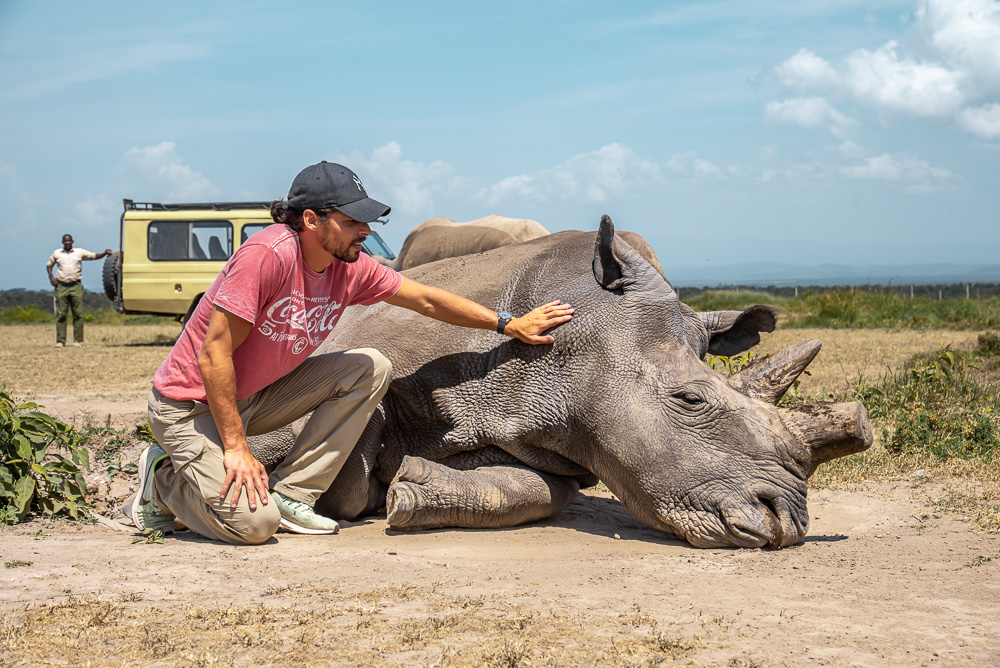 Serena Sweetwaters | Safari from the Comfort of Your Room