Best Way To Get From Aachen to Cologne 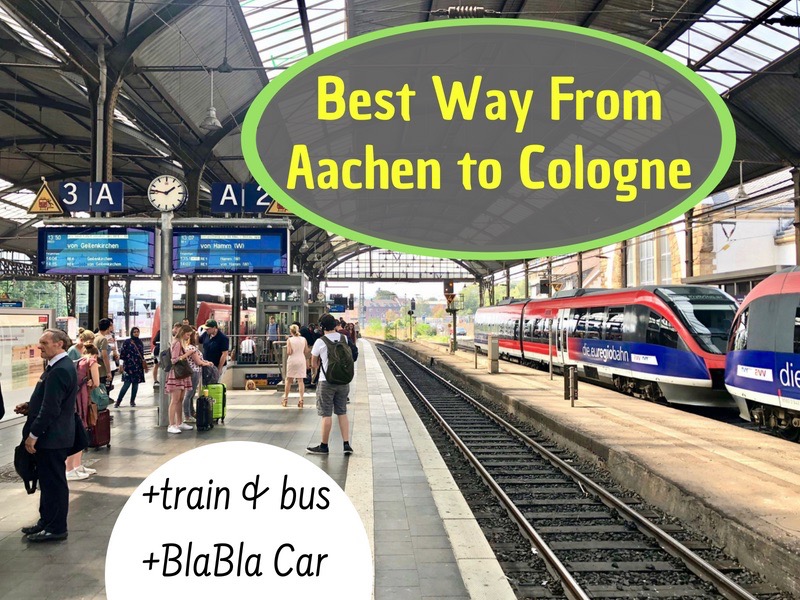 As I grew up in the southeast of Holland next to the German and Belgium border I consider Aachen, Germany as my base. Because of that I travel to Germany often and mostly start my blogging trips from either Cologne Airport or Dusseldorf Airport. The Cologne - Aachen stretch is probably one of my most traveled routes in Germany and because there are many ways to complete this route I wanted to help you find the best way to get from Aachen to Cologne.

From Aachen to Cologne

There are of course several ways to get from one city to another and vice versa. Assuming most travelers don’t have a car available I discuss other ways to get around Germany: bus, train and professional hitchhiking.

Also considering to visit Frankfurt? Click on the link for my complete city guide with the best things to do.

Train from Aachen to Cologne

I love traveling by train honestly, but in Germany I can’t be bothered. There are many reasons I rather don’t travel by train in Germany, but first let me give you the available options.

Actually the train from Aachen to Cologne is a fast way to travel in and between and it takes only about 50 minutes from Aachen Hbf to Cologne Hbf. The other advantage of traveling by train is that you get off right in the heart of Cologne next to the famous cathedral.

To buy a ticket for the Aachen - Cologne stretch simply show up at Aachen Central Station also called Hauptbahnhof (Hbf). Head to the Reisezentrum (Travel Information) where you can buy tickets. 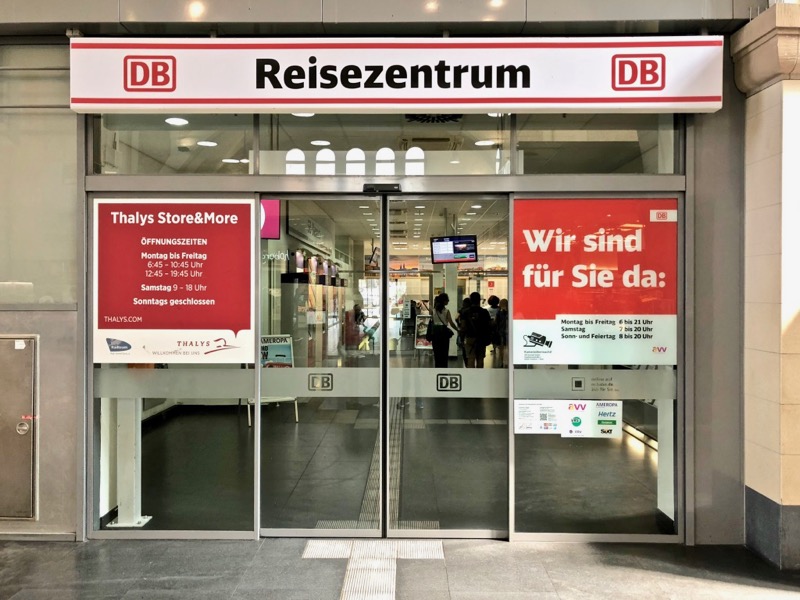 You can queue up and buy a ticket with a service employee but there are 4 machines on your left that are easily navigable. 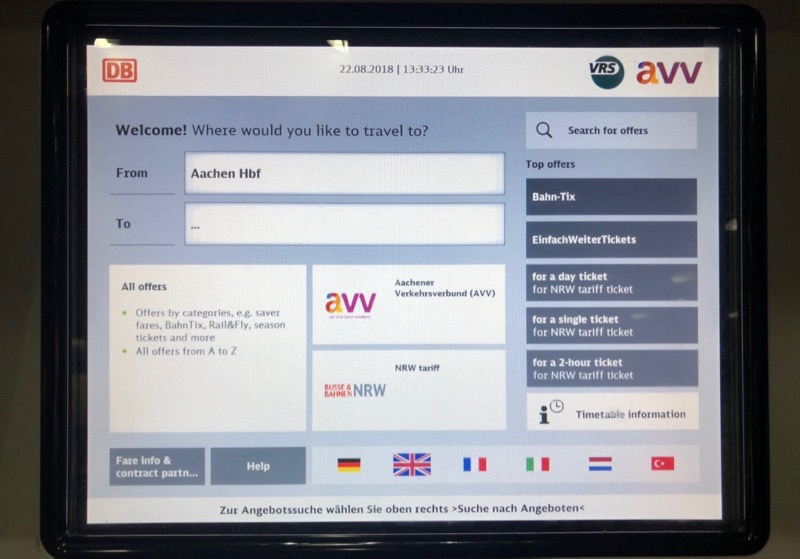 Big plus is that these machines can be guided in 6 languages: German, English, Dutch, French, Italian and Turkish.

There are several train tickets available on the machine, but a single train ticket from Aachen to Cologne will cost you €17,50. The train only takes 50 minutes, so yes taking the train in Germany is expensive! 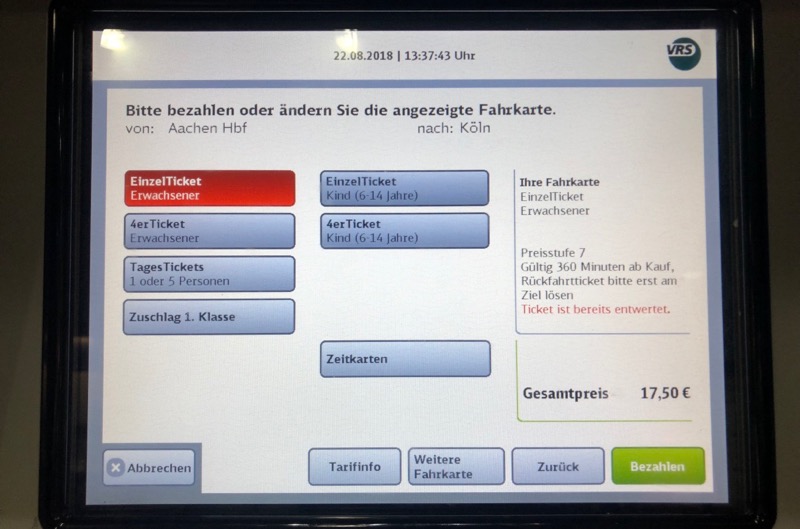 If you want a return ticket it is better to buy a NRW day ticket which will cost €30,50 for the day. 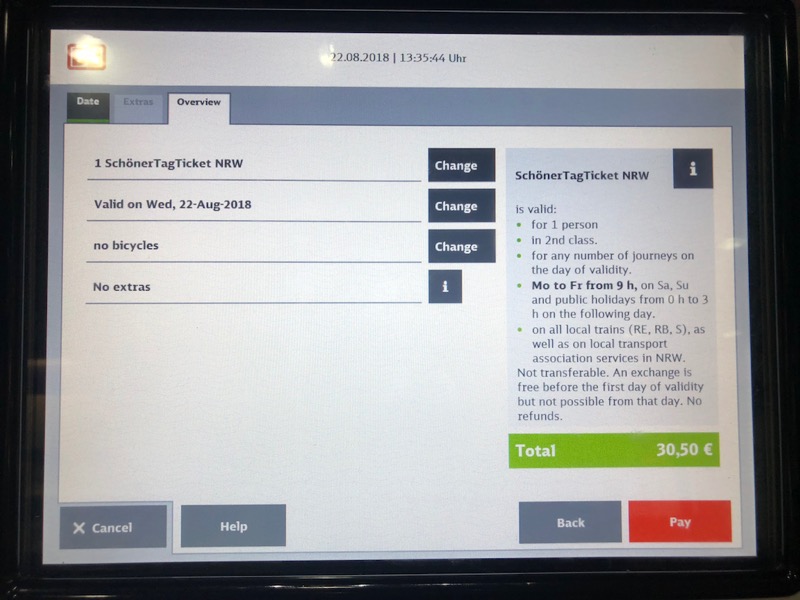 This is almost the same price as buying a return ticket from Aachen to Cologne, which is €29,40. 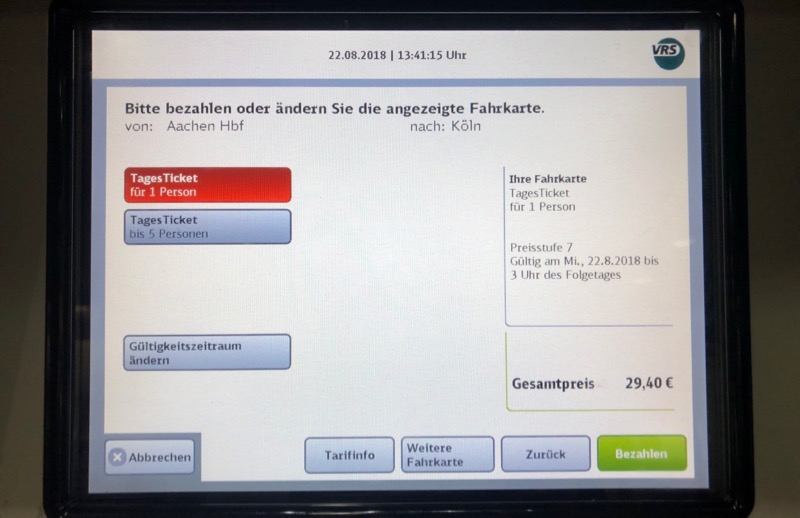 Traveling to Germany and want to buy a German sim card for tourists? Click here to find the best options as I checked all mobile phone providers in Germany for you.

The ticket machines are easy to use and will guide you through the menu. Be aware that train tickets in Germany have a set time. Different than for example traveling by train in Netherlands where you can take the train any given time with a ticket. In Germany you have to select the exact time! 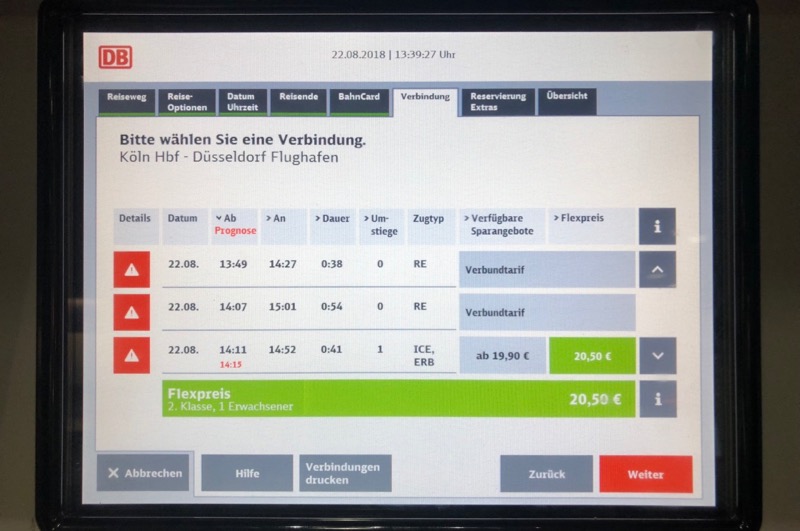 Trains from Aachen to Cologne mostly leave from Track 2 and the direction of the train is called Hamm (West). 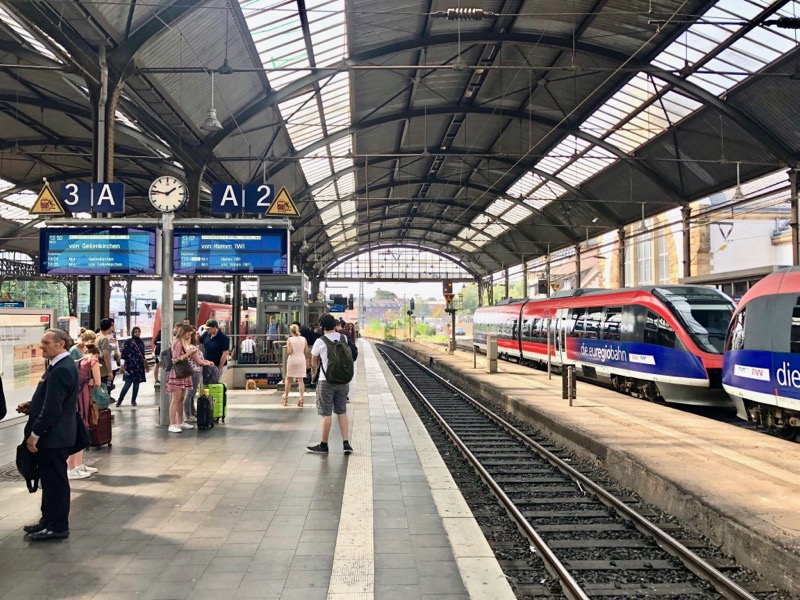 Although buying a ticket from Aachen to Cologne is easy at the station, I would recommend you to buy your ticket online. IT saves you the hassle and you can use an electronic ticket on your phone. If you book through GoEuro they will show you all the available times including the price. Prices fluctuate often, so check them out in the link below.

Germany may be one of the most developed countries in the world, but their trains are inconvenient for travelers. First off they are of course expensive, but for that price you expect comfort at least. If you are traveling with a suitcase don’t expect to find a space for your suitcase. You will have to put it up on a seat. Putting it in the isle is not allowed. 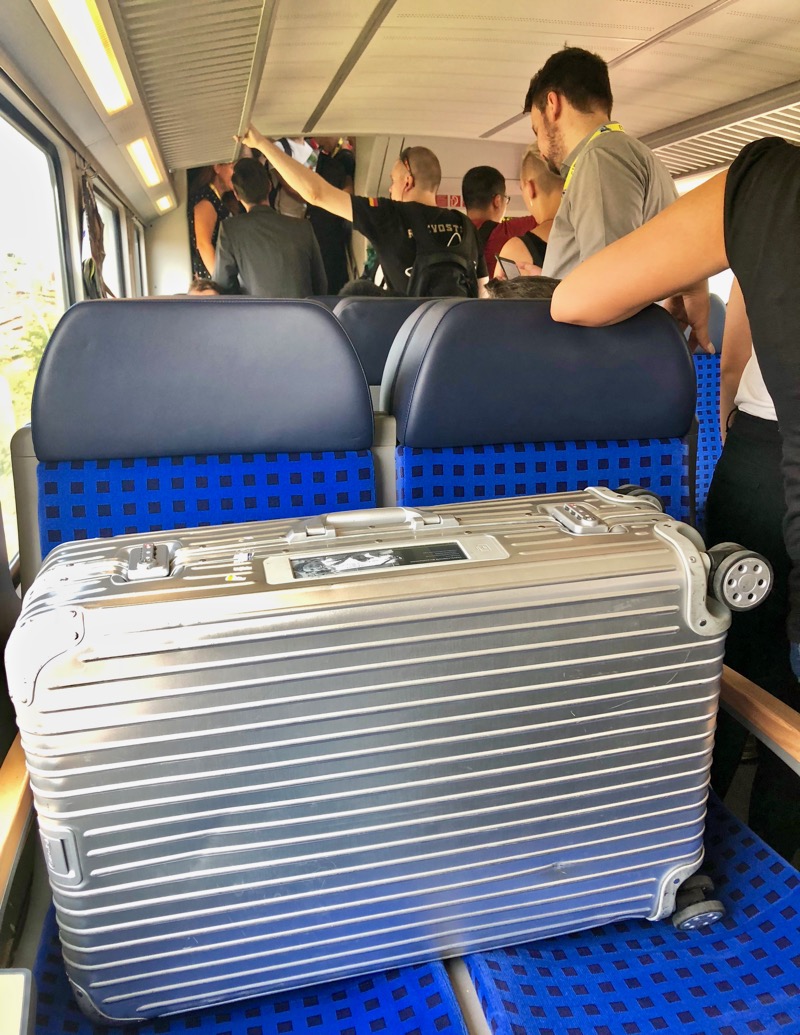 Another extremely uncomfortable thing is that there is no AC. If you travel by ICE instead of Deutsche Bahn yes there will be AC, but tickets for these long distance trains are even more expensive! Deutsche Bahn trains often don’t have AC and can be crazy hot in summer!

Last but not least: no WIFI! Damn it Deutsche Bahn we almost live in 2020. There is even WiFi in busses in India!

I luckily speak fluent German but in the trains there is zero information available in English. You will have to ask other passengers. Germans are super friendly towards travelers so there is always someone to help you out!

If you think traveling by train is the best way to get from Aachen to Cologne then wait till you have seen the options for traveling by bus.

Curious about the stops on my road trip from Dusseldorf to Cologne and onwards? Read it in my blog post.

Bus from Aachen to Cologne

This is my favorite way of traveling between Aachen and Cologne. First of all it is cheap. Single tickets can already been found for just €5. Compared to the train from Aachen to Cologne that is at least 4 times cheaper!

Busses depart from two different stations in Aachen and arrive at two different stations in Cologne and the bus trip takes just 10 minutes longer than the train. A little bummer for traveling from Aachen to Cologne by bus is the fact that busses only drop you on the outskirts of the city. You can either disembark at North Cologne (Leverkussen Mitte) or at Cologne/Bonn Airport. From both places it is easy to get to Cologne Centrum by tram though.

Great advantage of traveling by bus from Cologne to Aachen is that busses have WiFi, are super comfortable and serve the two cities multiple times a day, even during the night. Busses obviously also have AC and reclining chairs.

Asking me the what is the best way from Aachen to Cologne I would definitely say take a bus!

If you have never heard of this concept yet then it is best to be described as a professional hitchhiking service. BlaBla Cars connects drivers going in a certain direction with travelers heading the same way. For a set fee to be decided by the driver you can join his ride. Meet at a certain spot, hop on, pay and be dropped off at the arranged place. BlaBla Cars ranks drivers and hitchhikers based on user experiences. So yes you get into a car with a stranger, but they are rated by previous hitchhikers so there is no need to be worried. So the find the best ride from Aachen to Cologne go to GoEuro.