7 Reasons to Stay at Volkshotel Amsterdam 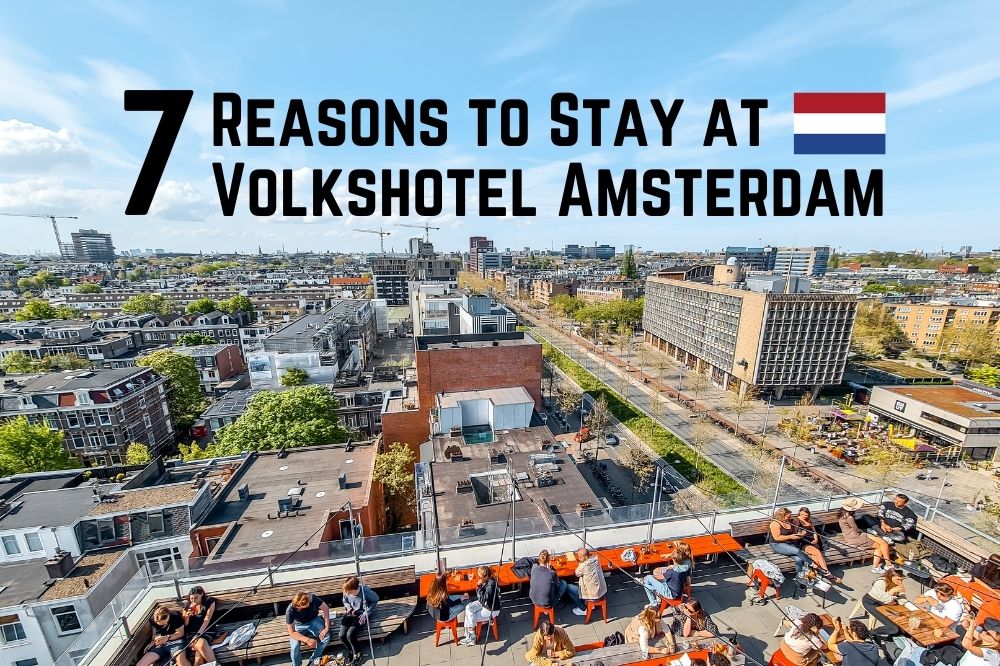 A trip to Amsterdam is always a good idea. So whenever we can, we love to add a short trip to our capital city. Even though we love the busy and bustling city center, lately we started exploring some other suburbs of Amsterdam, with more authentic experiences. That’s how we ended up in Amsterdam-East, at the Volkshotel, to fully experience some new parts of Amsterdam. 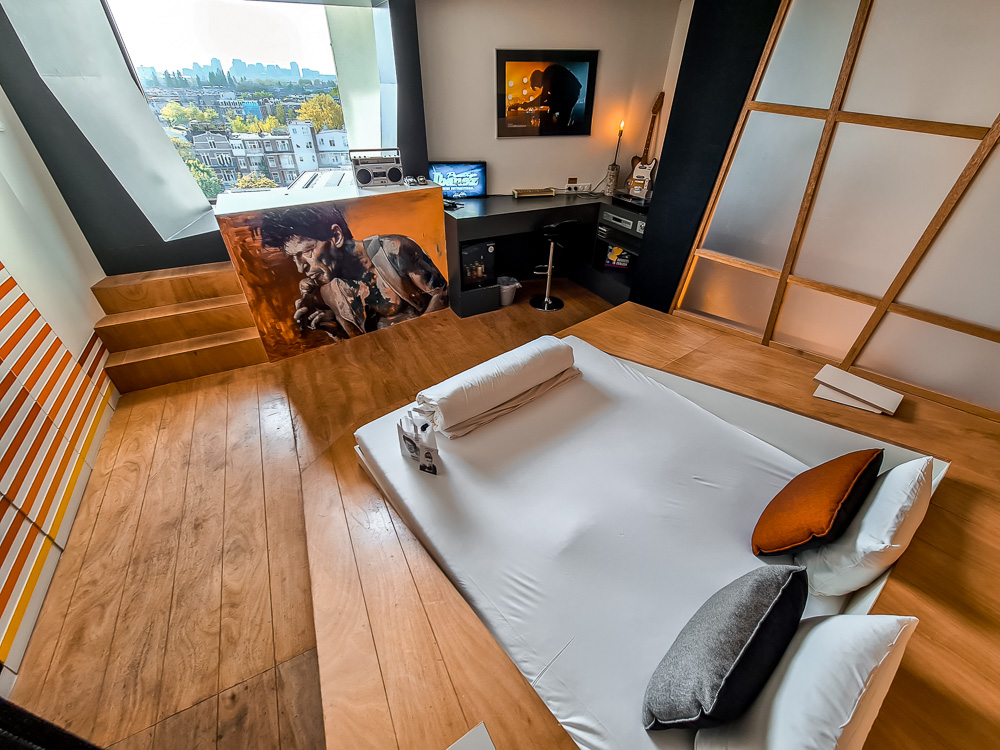 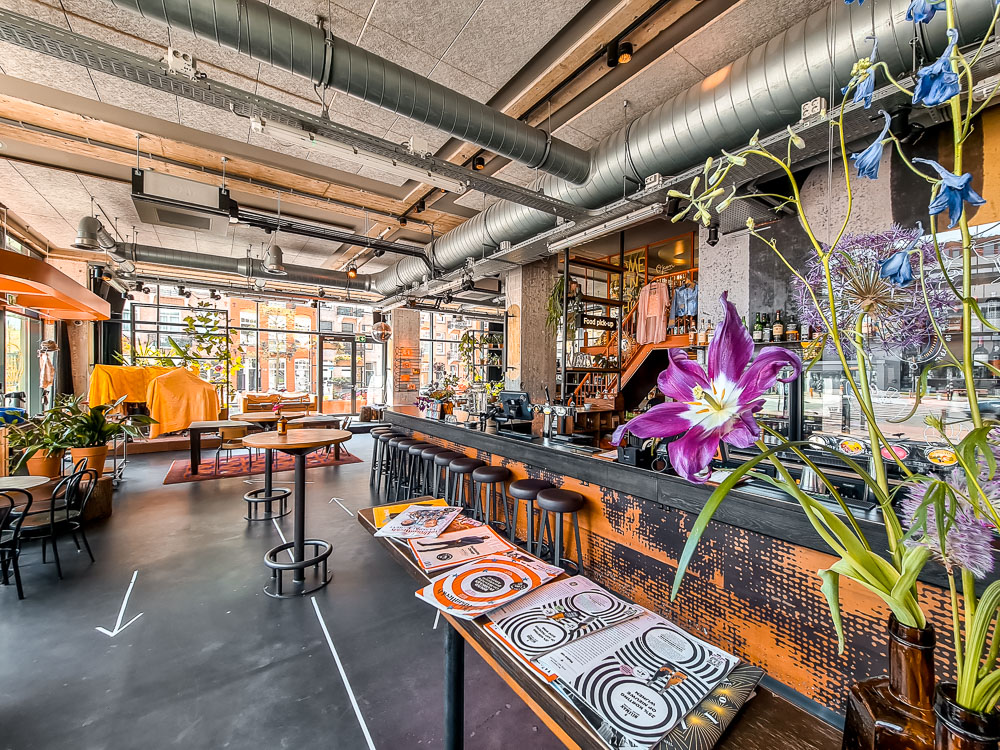 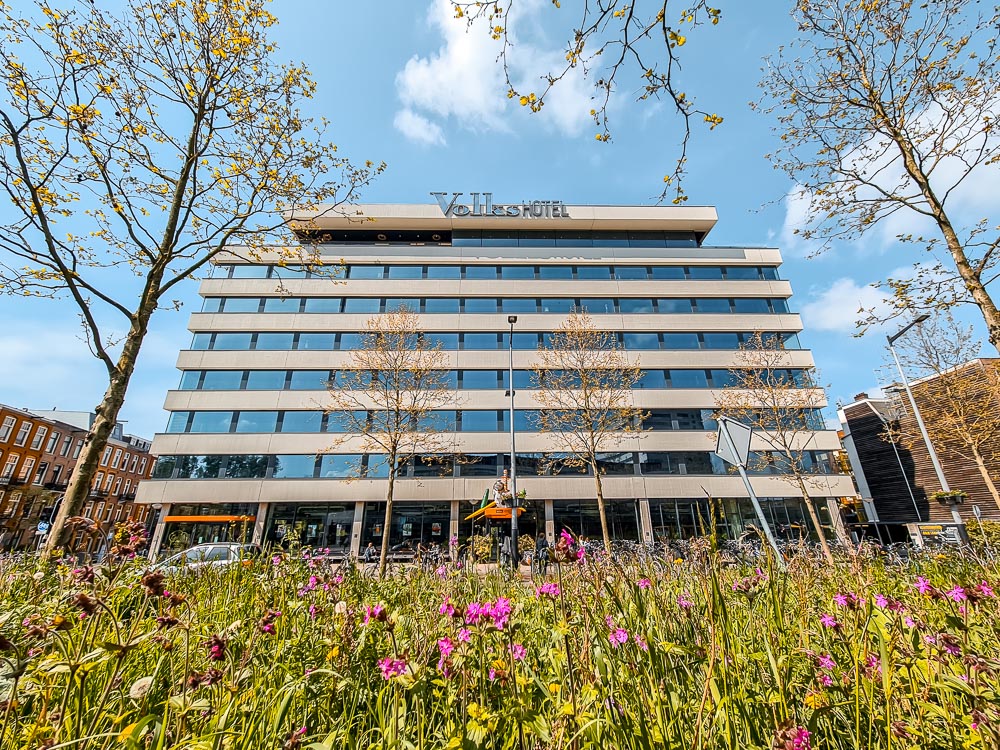 The Volkshotel has a rich history, and certainly wasn’t always a hotel. The building that’s now home to the Volkshotel was for more than 40 years home to the famous Dutch newspaper Volkskrant, which was written and printed in this building.

In September 1965 the Volkskrant building opened its large, shiny glass doors. At that moment in time it was the most modern newspaper house of the Netherlands. The Volkskrant called the building at the Wibautstraat home for 42 years, until they moved out in 2007. Because this move was planned for a longer period of time, little was invested in maintenance, which eventually really showed.

Awaiting demolition of the building, a temporary destination was sought. Urban Resort Foundation (the link between vacant real estate and cultural entrepreneurs looking for a workplace) decided to fill the building with young, creative entrepreneurs.

The Volkskrant building soon filled up with hundreds of creative minds and it grew into one of the largest creative breeding grounds in the Netherlands. Creative minds think alike, so by the end of 2010, plans emerged for the Volkshotel. By mid-2011 these plans started to become more concrete and they started designing the building and the interior.

And then on June 27th 2014, it finally happened; the Volkshotel opened its doors. Almost fifty years after the delivery of the building on the Wibautstaat, the former newspaper building became more lively than ever!

RELATED: 27 Best Places to Visit in The Netherlands!

Belgium
Bruges Travel Guide | Why You MUST Visit in 2021

Location of the Volkshotel 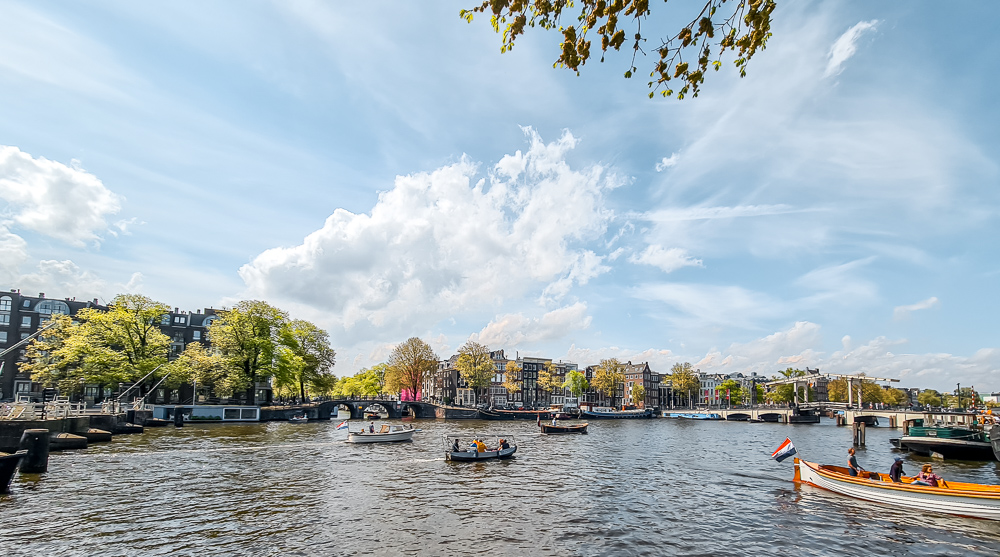 The Volkshotel is located in the former Volkskrant building on the Wibautstraat in Amsterdam East, close to the Amstel River, the bohemian Pijp neighborhood, the Ooster Park and the market on Waterlooplein. It’s the perfect location and destination if you want to experience the real working-class neighborhoods of Amsterdam. Just go out and start wandering, you’ll be amazed by the beauty of these Amsterdam suburbs.

The hotel is very easily accessible by car and even has it’s own parking lot for guests. Parking here will cost you €20 for 24 hours, which is still quite expensive, but a fair price for Amsterdam city center.

Well, the Volkshotel is also located right next to metro stop ‘Wibautstraat’. So if you’re coming by car, let me suggest the following:

Park your car at the Johan Cruijff Arena (the Ajax Amsterdam stadium) at their P&R spots. Buy a metro card and take the metro from Bijlmer Arena Stop to Wibautstraat, metro number 54. Once you go back after your stay in Amsterdam, first show your P&R ticket, then your metro card and parking there will then cost you exactly €1 per day! How cool is that?!

Having the metro right in front of the hotel makes it very easy to travel through Amsterdam, however, as I always say, you see so much more if you go out on foot!

What makes staying at the Volkhotel so unique? 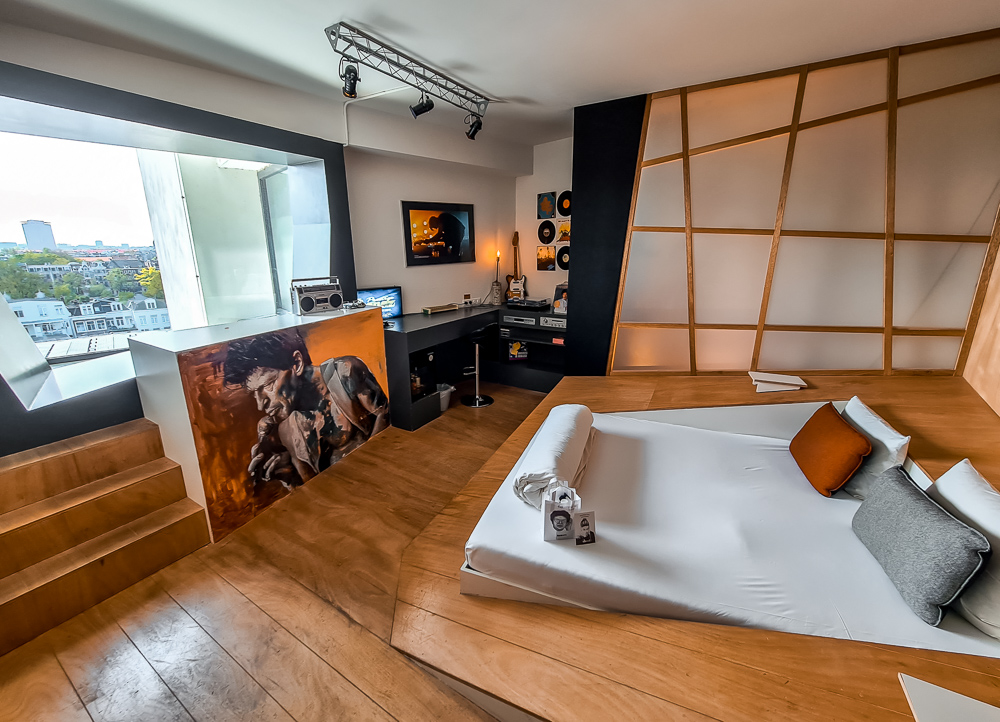 Volkshotel has 177 guest rooms, divided over standard rooms and special rooms. Their special rooms are all unique and special creations, none of them are the same. Which makes them all very interesting and hard to make a choice really. They all have a story to tell.

We were given the Jukebox Johnny room. It’s the place for music lovers! Geometric shapes, inclined planes and great sound. Sleeping in this room is like living in a giant jukebox, equipped with an extensive collection of vinyl, CDs and old-fashioned cassettes. Relax in the window frame or dance in the bathroom with disco ball. It’s up to you, you’re the DJ! This room was specially designed for the Volkshotel by Remco Gonggrijp. 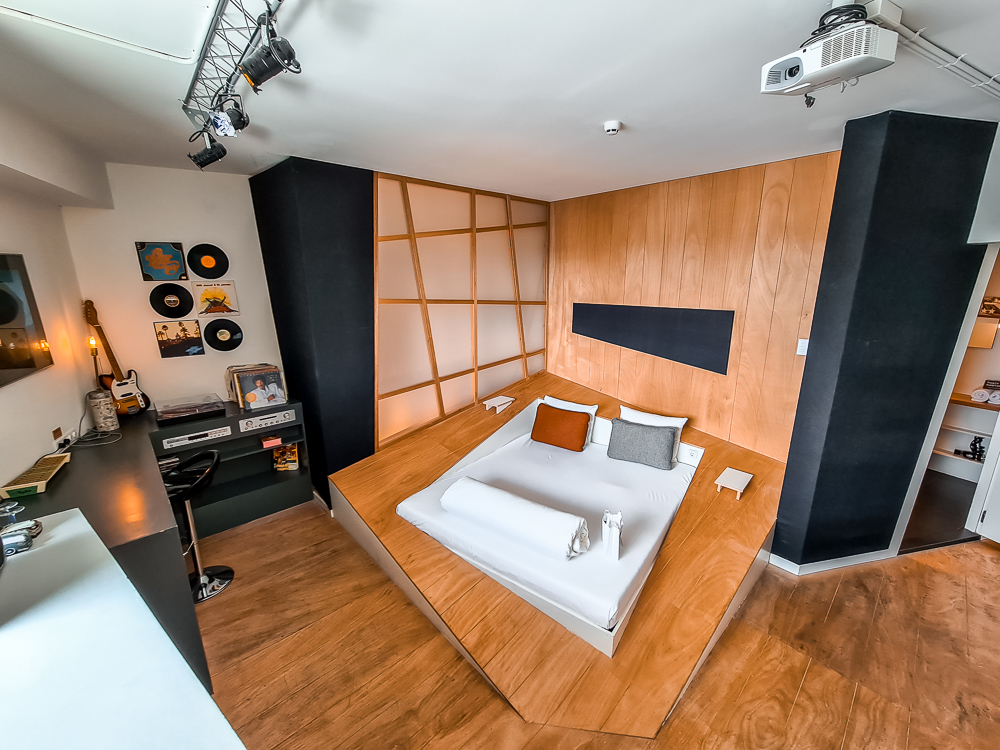 It’s hard to pick one best part of the room. I loved the bathroom with the tub as centerpiece, including a real disco ball. 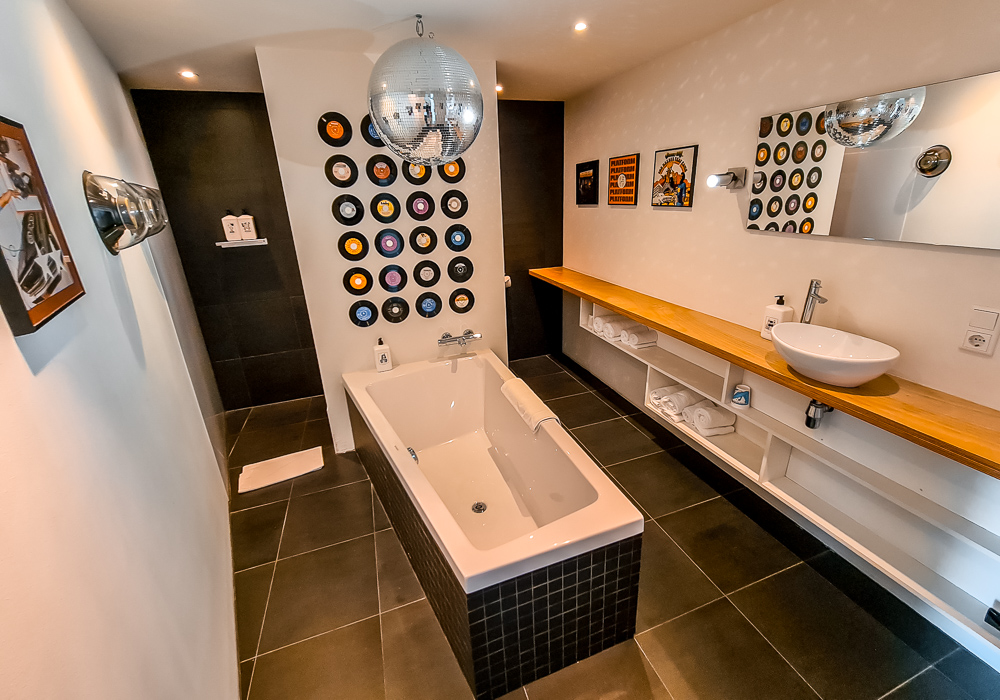 Or the massive window with views of Amsterdam, I could honestly sit there all day and just take in the views. We loved being our own DJ, playing vinyl and enjoying some Dutch classics. 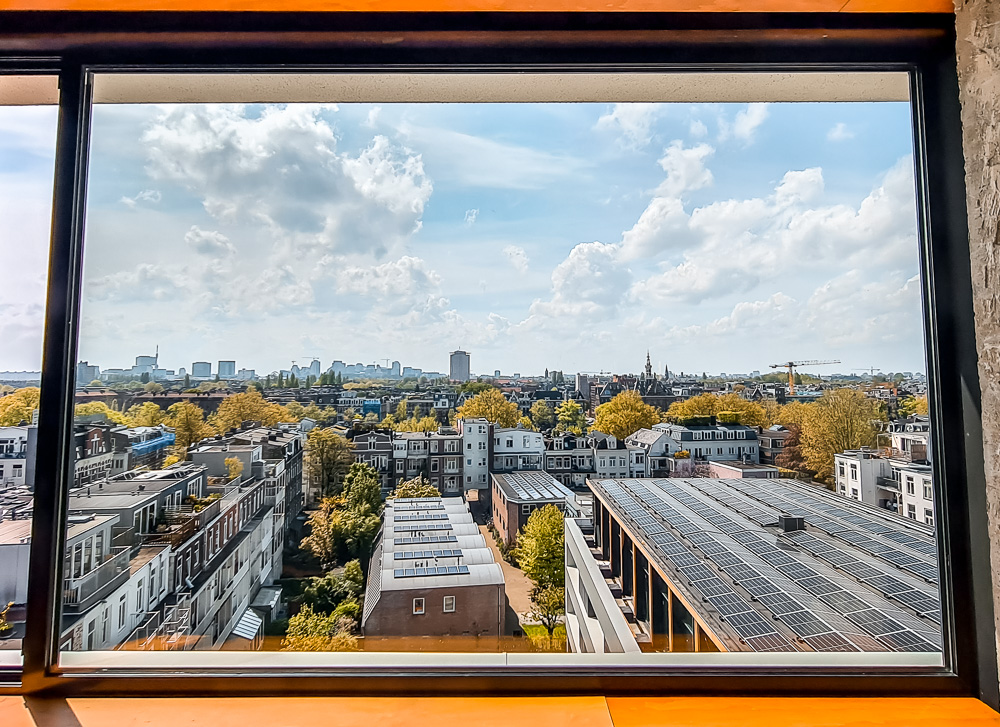 The room has a complimentary minibar with some beers, wines, sodas and some sweet and salty snacks. So make sure to enjoy them to the fullest.

Something I also really liked is the massive beamer screen that comes down in front of your window, which you can use to watch television and Netflix. 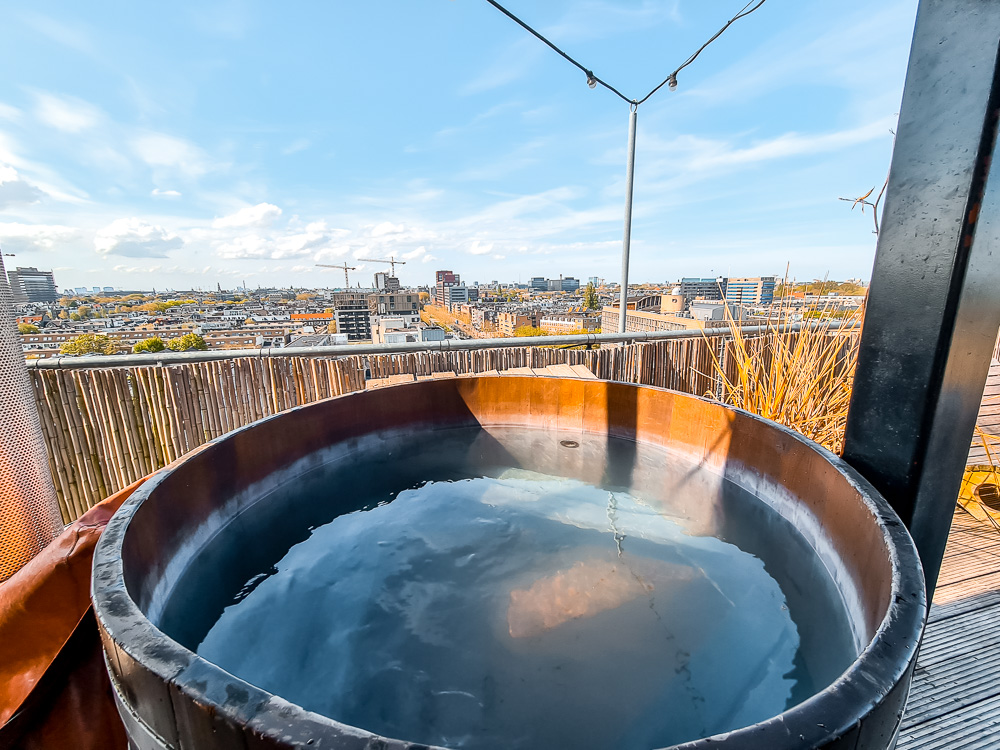 I think this is by far my favorite spot of the hotel. Located on the eighth floor of the hotel you will find the ‘Badplaats’, hot tubs and sauna with stunning and breathtaking views of Amsterdam. It’s your place for ultimate relaxation.

Keep in mind that due to Covid the hot tubs and sauna are currently only available to hotel guests and on reservation.

3. Summer in the city 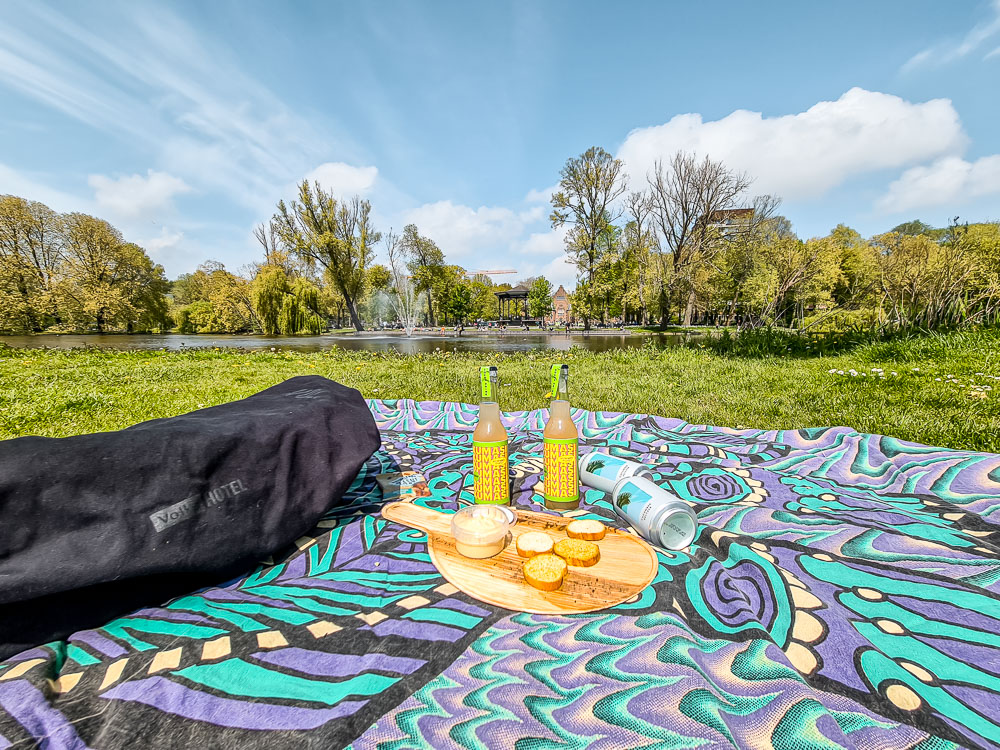 This Summer, Volkshotel invites you to get active! Get off the beaten track and discover Amsterdam and its surroundings by foot, bike or canoe. All three of them are great ways to explore Amsterdam East a bit more. We decided to go for the hike route.

Mademoiselle Pipi, the legendary toilet attendant of Volkshotel, audio guides you past all kinds of special underexposed places in Amsterdam East.

While walking you get to know the Amsterdam East district. We loved it, you walk through the Oosterpark, which we consider a great and more relaxed alternative to the often busy Vondelpark. 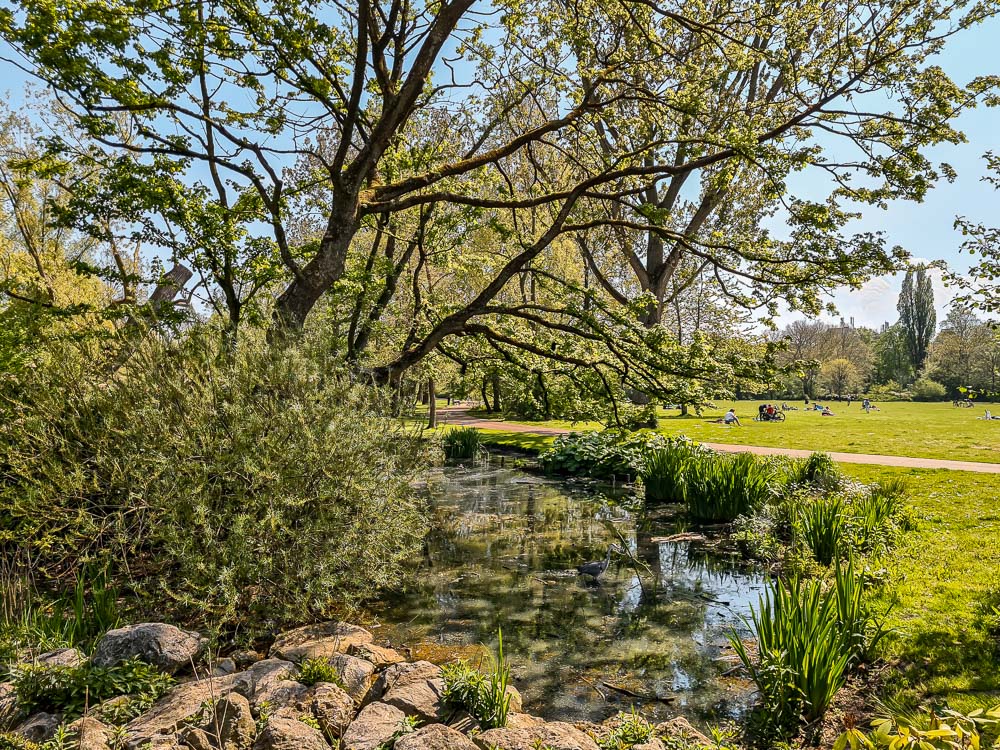 We experienced Amsterdam East as a very lively and cozy neighbourhood. A real working-class neighbourhood and very multi-cultural.

The hike tour of the summer in the city initiative comes with everything you need. Don’t forget to bring your own headphones, so you can listen to Mademoiselle Pipi telling you all about her favorite Amsterdam neighbourhood.

It also includes a map including QR code, so you can also get the directions at your phone. And most important, you will be given a portable minibar including beer, wine, snacks and all picnic essentials. I would almost say one of the best things to do in Amsterdam.

Not a guest at the Volkshotel? You can also book these tours, as well as canoe and bike experiences directly at the hotel. 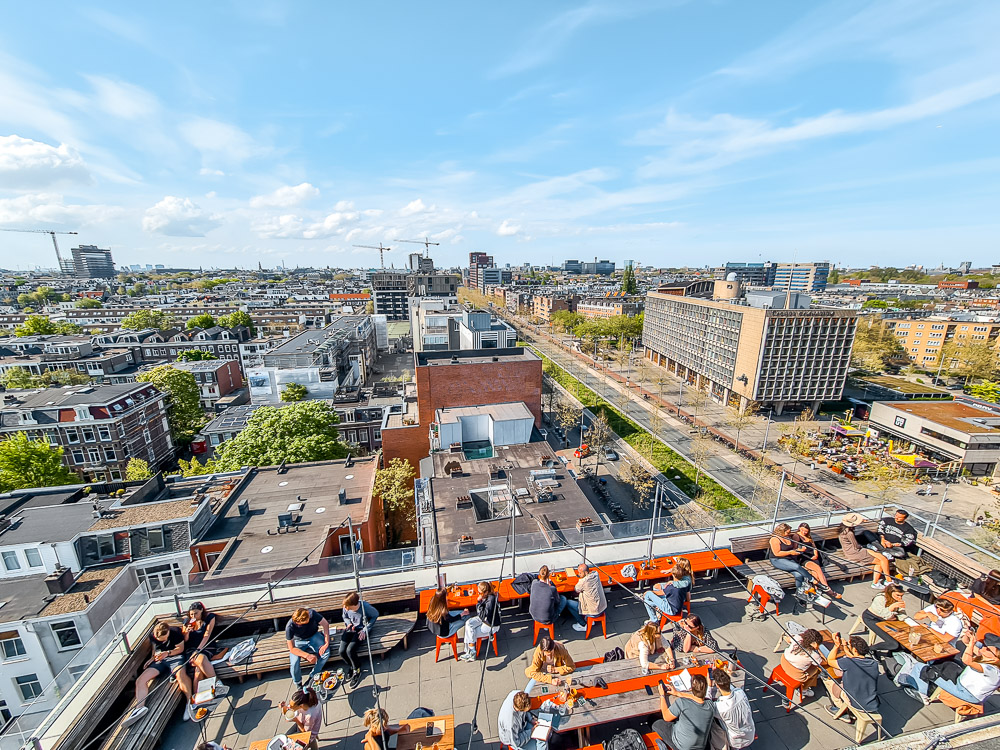 During the transition from newspaper building to hotel, one of the first things that actually happened was Canvas. Young catering entrepreneurs turned the former journalists canteen on the seventh floor into a club / restaurant, Canvas.

Canvas is still located on the seventh floor of the hotel, offering truly amazing and overwhelming views of the city. You can clearly point out some of Amsterdam’s hotspots from the Canvas rooftop terrace.

It’s your place to be, day and night. It’s a place where dining and dancing go hand in hand. It’s your place to have breakfast, your first beer of the day or where you slowly watch the sun set over Amsterdam. Truly one of the best rooftop bars in Amsterdam.

After the departure of the Volkskrant, Urban Resort took over the building and managed it. They changed it into a thriving breeding ground where hundreds of artists, creative minds and social entrepreneurs find an affordable workplace. After the opening of the new Volkshotel, the Broedplaats (breeding ground) was downsized but remains in the rear wing of the building.

Even though it’s currently closed due to Covid restrictions, the Volkshotel actually has its own venue for live music, Doka! In Doka sound predominates. Here, DJ’s, bands and creatives send their sounds into the world. The cellar is the place where different sub-cultures meet, just relax or let yourself go.

This is something I really like and appreciate about hotels, games rooms. Whenever we come across one, it brings back the inner child, and of course some healthy competition. This games room offers it all, from classic Dutch games to modern computer games. They have even lined up some easel, just request painting supplies at reception and start making your master piece.

Go book your stay in the Volkshotel

Volkshotel Amsterdam in many ways truly is a hotel of and for the people. Walking in through their front door, it doesn’t feel like walking in to a hotel. It feels like you’re stepping into someone’s large but cozy living room. If you’re planning to visit Amsterdam, but want to do it like you never have before, consider the Volkshotel in Amsterdam East.

This review was written by travel writer and Traveltomtom team member Ashley. She stayed at the unique and wonderful Volkshotel on behalf of Traveltomtom and wrote this blog about her experiences. 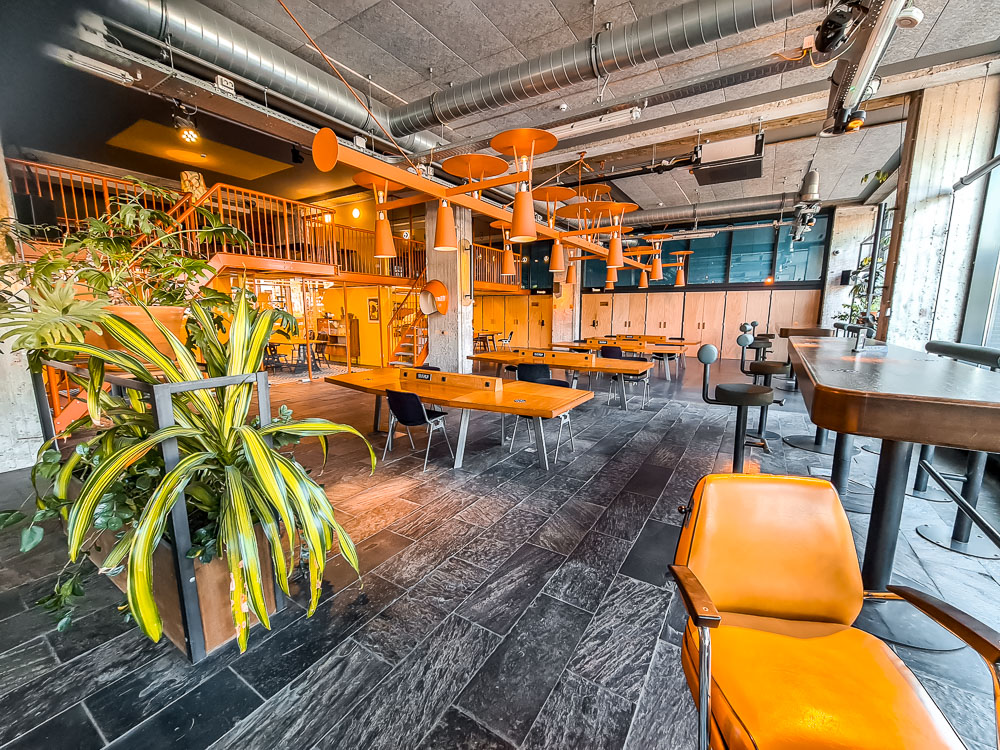 Bruges Travel Guide | Why You MUST Visit in 2021