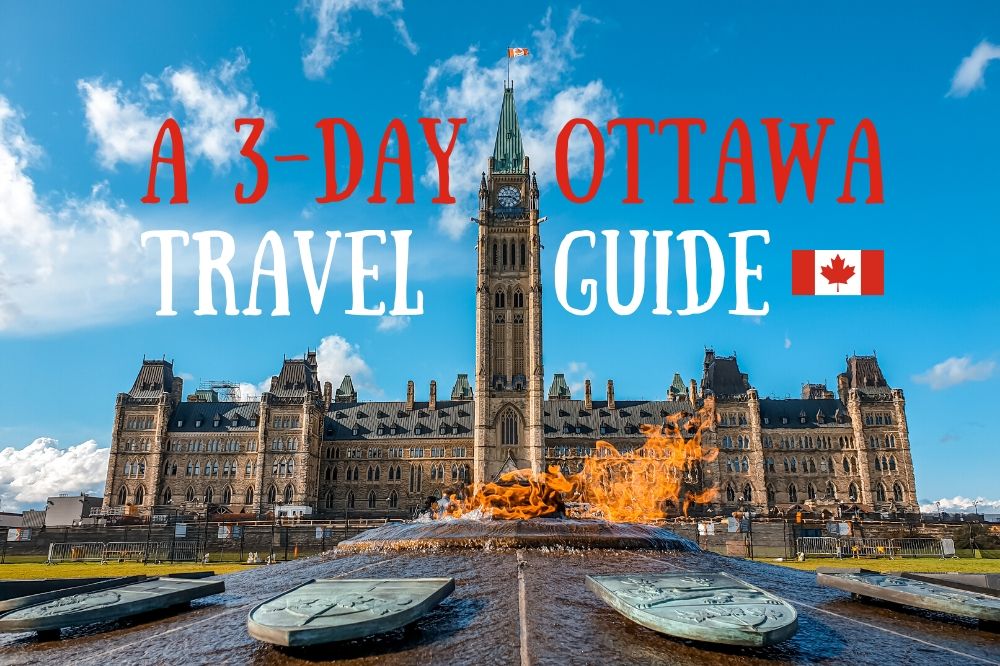 Canada’s capital Ottawa was without any doubt one of my stops on my itinerary. The only thing I knew was that I really wanted to visit Parliament Hill, to see where all the important decisions are made in Canada. But after spending three lovely days in Ottawa I left the city, impressed by everything I did, saw and experienced those past three days.

For some reason I find capital cities very interesting to visit. They always have that extra something to offer. When traveling the East of Canada for about two weeks I visited Ottawa. Please let me take you to Ottawa, tell you all about this wonderful capital city, and make you just as excited about Ottawa as I am.

On my East Coast trip in Canada and the USA I also visited places like Arowhon Pines, Niagara Falls US side, stayed at the Fairmont Quebec, and many more adventures. Almost forgetting about my helicopter flight over NY as well as my helicopter tour over the Niagara Falls.

The capital of Canada is located in Ontario at the Quebec border, it’s a place where you’ll hear English as well as French spoken in the streets; where you can discover Canada’s proud heritage at impressive national sites and famous tourist attractions, including the Rideau Canal (a UNESCO World Heritage Site). A city where you’ll find world-class museums and galleries displaying national collections and special exhibitions from Canada and around the world.

Even though it is Canada’s capital city, there is a relaxed vibe, a very welcoming and walkable city. Take a stroll through the historic ByWard market area for example, a bustling farmers’ market and some of the best restaurants in town.

As a city Ottawa has celebrations and events going on throughout the year, beginning each year in February with Winterlude, followed by the Canadian Tulip Festival in May, then heating up July 1st with the biggest Canada Day celebration in the country, and of course some headliner summer music festivals. Ottawa events are some of Canada’s best.

In 2017 Canada celebrated its 150th anniversary. On the occasion of this anniversary many new things were added to the city of Ottawa. Some of these new additions include the ‘Ottawa’ letters at the ByWard Market and the Arctic part of the Museum of Nature.

I visited Ottawa late September, and thought I would visit a more quiet city this time of year. That was not the case. September and October are actually quite busy months for the city of Ottawa. Students from across Canada come to visit the Parliament buildings as part of the education. 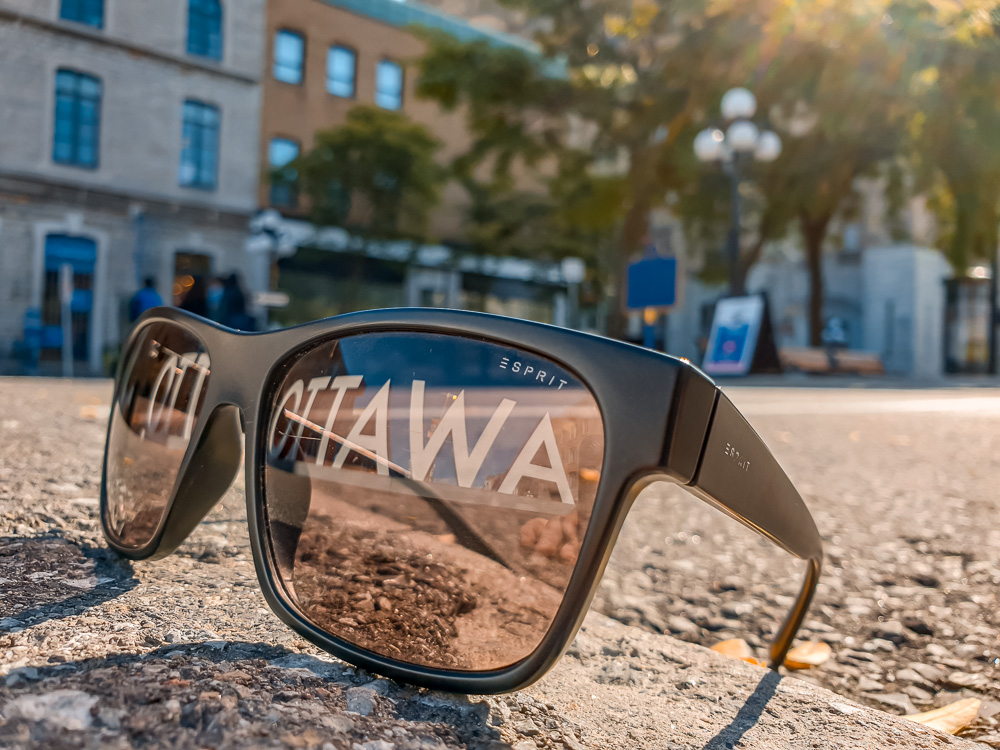 Be invited, this is Ottawa, Canada’s capital. Come experience it for yourself and let this 3-days in Ottawa travel guide take you along the best things to do in Ottawa.

Ottawa things to do

Even though it is a relatively small capital city, Ottawa still has plenty to offer for those who are keen on exploring cities. To start, Ottawa is home to most of Canada’s national museums. Most Ottawa attractions are within a 20-minute walk from most downtown hotels. So, go out and explore this city to the fullest! Get active while sightseeing and take in the relaxed vibe of this city while strolling from one place to see to the next thing to do.

Start with Parliament Hill, one of Canada’s most iconic sites and absolutely a must see in Ottawa. Right in front of the parliament buildings you’ll first see the Centennial Flame. The flame commemorates Canada’s 100th anniversary as a confederation. The fountain surrounding the flame contains the shields of Canada’s 13 provinces and territories. The flame was erected as a temporary monument, but due to great public support it still stands today.

Probably located at the best and most beautiful location in Ottawa, the Parliament buildings overlook the majestic Ottawa River. Even though Parliament Hill is home to the country’s federal government, as a visitor you’re more than welcome on-site for free tours, all year long. Definitely the best free thing to do in Ottawa. The only thing you have to do is reserve your guided tour of the Senate and the House of Commons online at visit.parl.ca. 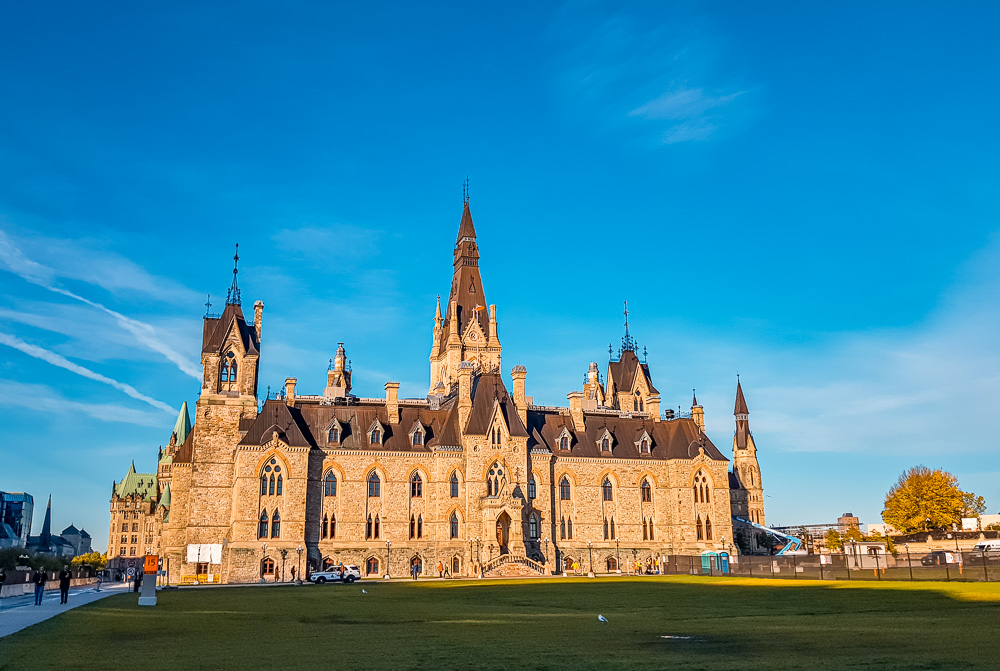 I think this my best recommendation and surely one of the best things to do in Ottawa! ByWard Market is such a lovely and lively neighborhood. It is one of the oldest and largest farmers’ markets in Canada. The market is packed with vendors of fresh food, classic Canadian maple syrup and crafts, eateries, coffee shops, you name it, they have it.

The Ottawa ByWard Market became world famous when President Obama visited Ottawa back in 2009 and decided to visit Le Moulin de Provence to buy a cookie. For over 10 years now, they have been creating these same cookies, now calling them Obama Cookies. Super commercial, and couldn’t be missed in this Ottawa travel guide but you just have to try these cookies.

Also located in the ByWard Market district, at its original stand on George Street, is Beavertail. A Canadian classic, born in Ottawa, nowadays available throughout the country. It is delicious fried dough pastry topped with your choice of sweet condiments and confections, chocolate, oreos, whipped cream and cinnamon sugar. Make sure you try one! 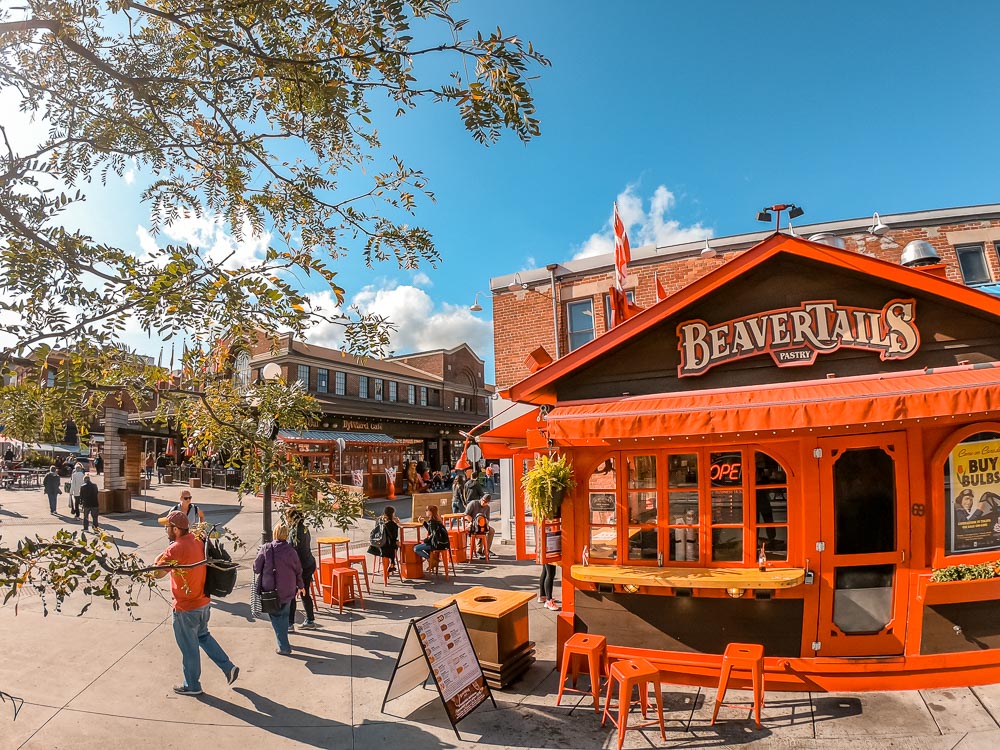 For Canada’s 150th anniversary celebrations the ‘Ottawa’ letters were placed in the ByWard Market area, soon becoming a popular Ottawa attraction. Take your selfie to show you were in Ottawa. 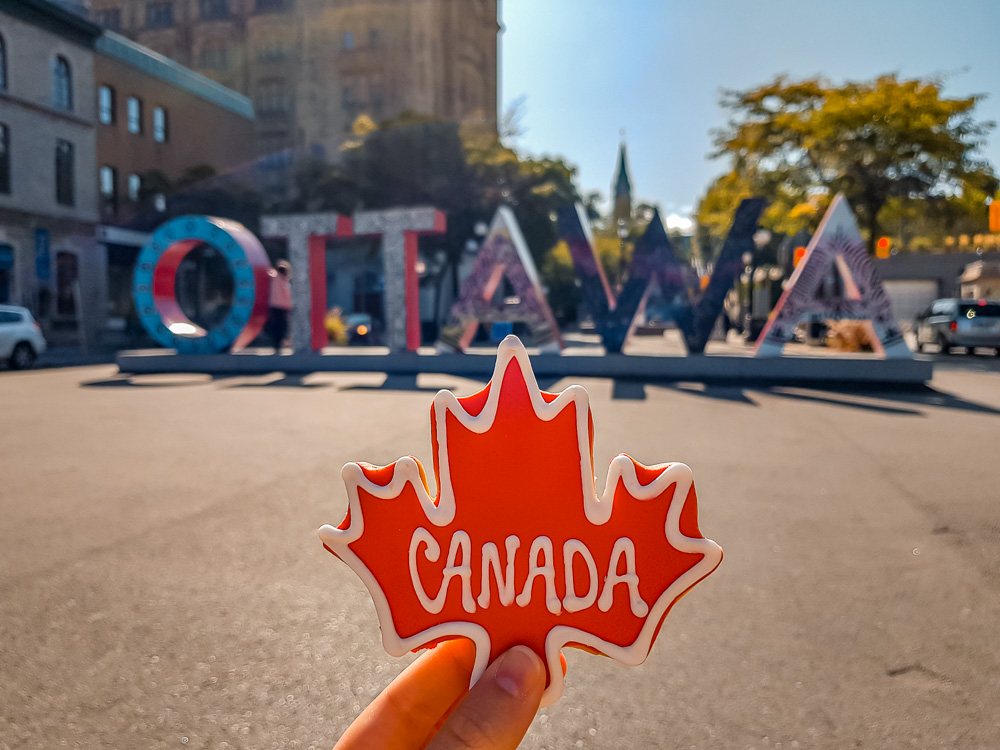 Visiting this historic, UNESCO World Heritage site is a must visit when 3 days in Ottawa. This major Ottawa tourist attraction weaves through downtown. Probably the most visited and photographed part of the Rideau Canal are the Ottawa Locks. They connect the Ottawa River and the Rideau Canal in the summer and are still manually operated.

In Summer you can boat or paddle this canal, while in winter the canal surface is completely frozen and it becomes the world’s largest skating rink, as designated by the Guinness Book of World Records. A fun thing to do in Ottawa, no matter what time of year you’re visiting! 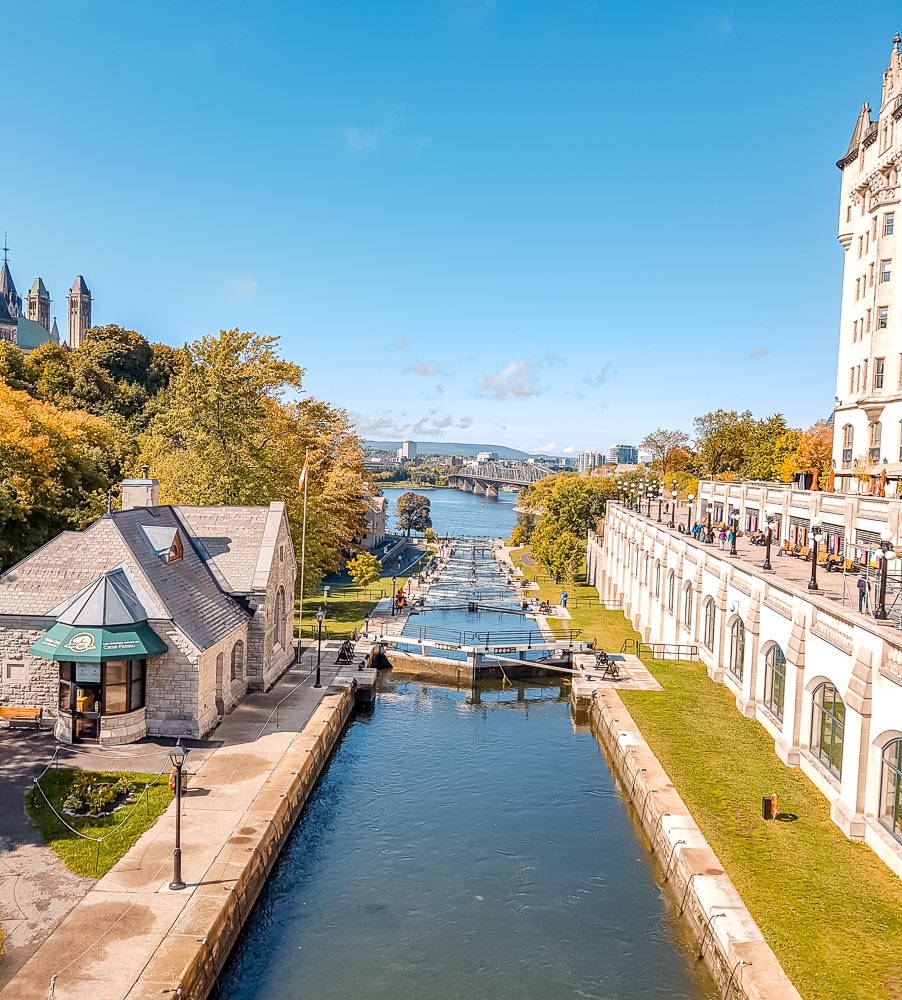 The city is home to most of Canada’s national museums, which can be a reason in itself to visit Ottawa. These award-winning museums and galleries are all located within minutes of Parliament Hill and many of the downtown area hotels, and very easily accessible. Whether it’s the National Gallery of Canada and its (Canadian) Art collection, the Canadian War Museum or the Canadian Museum of Nature, they all have something unique and are worth a visit for sure. 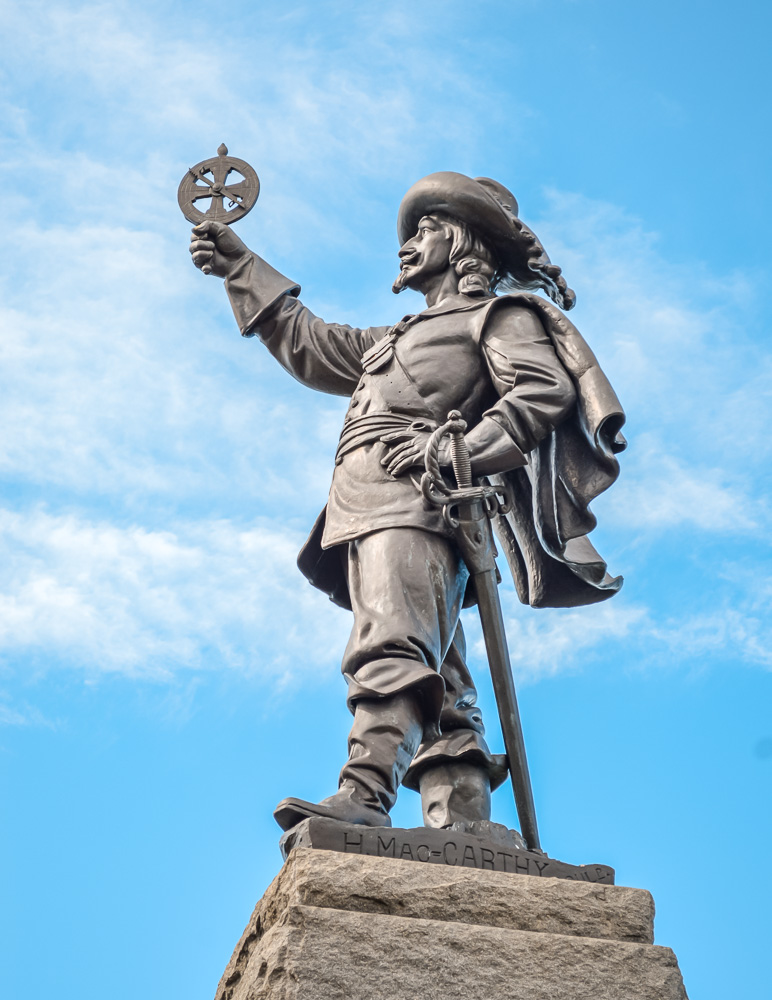 I would particularly like to point out the Canadian Museum of Nature, a very interesting and interactive museum. One of the best things to do in Ottawa with kids, you can do quiz questions here to test your knowledge, you can do grocery shopping in arctic regions to see how expensive things are there, and learn all about it in the meantime. This museum has four main themes: Arctic, Earth, Water and Fossils.

Something I really like to recommend in this Ottawa travel guide is the National museums Passport, which is valid for general admission over 3 consecutive days. Perfect for when visiting Ottawa for a weekend for example. It costs as less as CAD $35, and is valid for 3 visits to museums of your choice among the 7 participating national museums. This is absolutely a must do if you’re really into the cultural Ottawa attractions and want to see and do as many as possible during your 3 days in Ottawa. 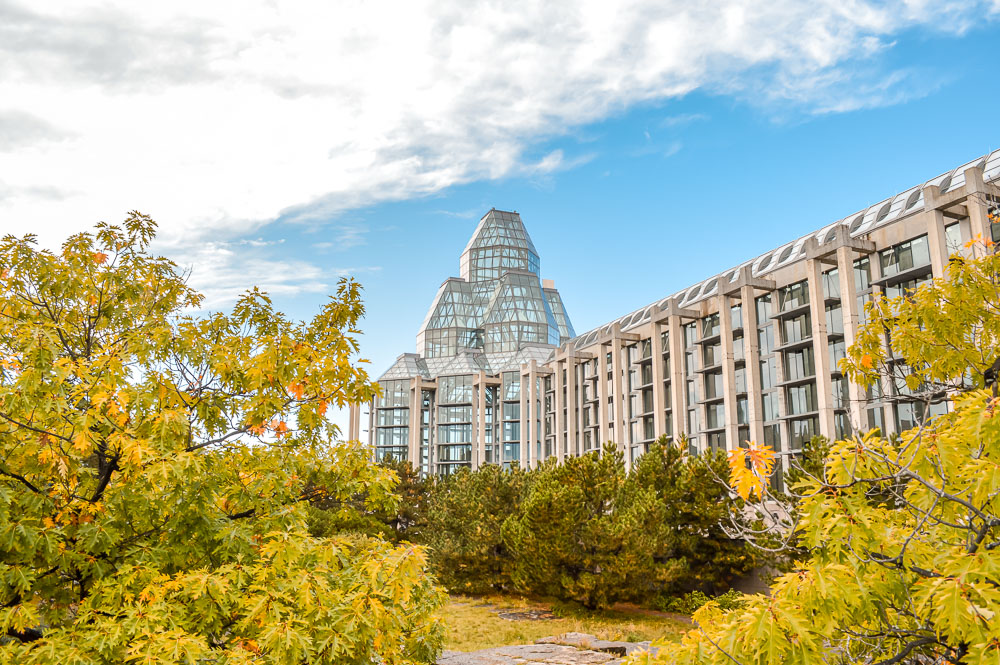 Every year in May, for 11 days straight, Ottawa becomes the colourful capital of Canada with the Canadian Tulip Festival. This is to celebrate Canada’s role in the liberation of the Netherlands during World War 2. The Tulips were gifted from the Dutch to the Canadians immediately following the Second World War as a symbol of international friendship. This became a friendship between two countries that has lasted over 74 years. The Tulips Festival is one of the best places to visit in Ottawa when you are lucky to be there during the festival days.

During the Second World War the Dutch Royal family was forced to flee the country in 1940, they left the Netherlands and went to Canada. Back then Princess Juliana was pregnant. Because Dutch Royals need to be born on Dutch grounds, Canada temporarily declared one room in the hospital Dutch, so their daughter, Princess Margriet was born as a Dutch citizen.

There are more similarities between Holland (Amsterdam) and Ottawa. They both have canals and lots of bike paths.

Ottawa offers a wide diversity of dining options. Whether you’re after some French, Italian or Chinese cuisine, or seafood, it can all be found in Canada’s capital city.

My top recommendation when spending a weekend in Ottawa is restaurant Play Food and Wine. An insiders tip, located in the ByWard Market area. An amazing relaxed atmosphere with the best food you can think of. It’s a tapas kind of restaurant with all plates and dishes to share. Window tables offer views on the Ottawa sign.

A classic Canadian dish, that has to be tried when in Canada is poutine. It’s a dish with French fries and cheese curds topped with a brown gravy. It’s recently been named Canada’s national dish.

Best place to stay in Ottawa

Looking for the perfect hotel in the heart of the city, and within walking distance to everything? Stop looking and check out the boutique Metcalfe Hotel, located in the heart of historic Ottawa. This locally owned and operated hotel is located just a few blocks from Parliament Hill.

They offer private parking, ideal for travelers who visit Ottawa as part of a trip through the East of Canada, like I did. Visiting Ottawa soon? Check out the rates of the Metcalfe Hotel here.

A very special thank you goes out to the team of Ottawa Tourism for hosting us in their beautiful city and for a complete carefree stay. Thank you for a private walking tour through your city and for giving us an unforgettable stay in Ottawa! 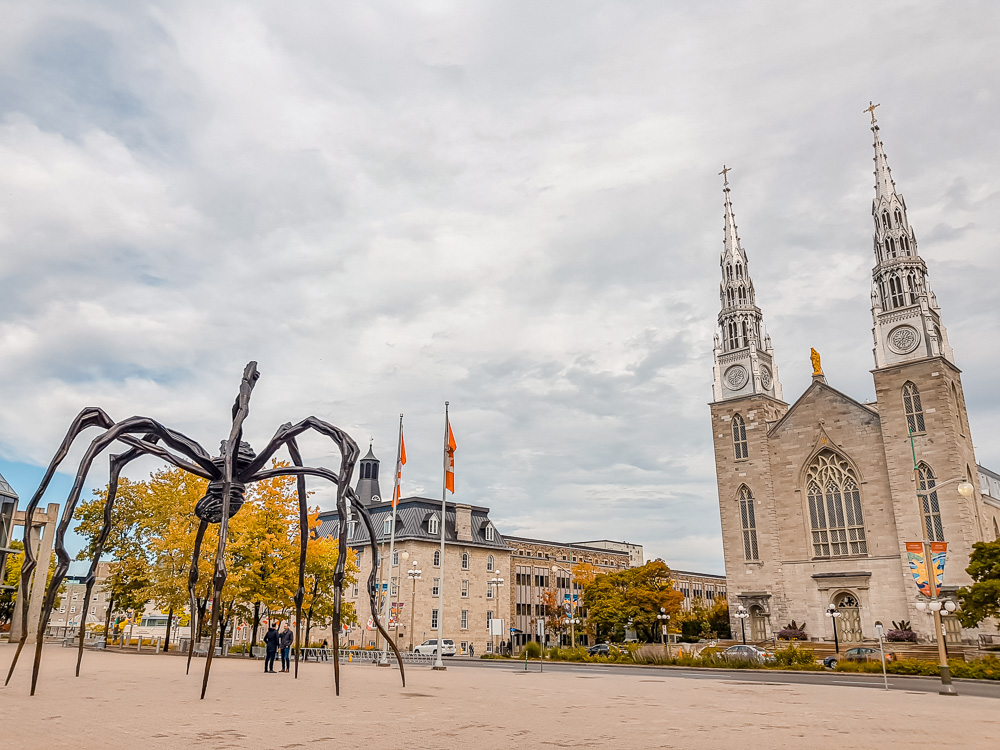 Travel writer and Traveltomtom team member Ashley wrote this Ottawa travel guide, while travelling through Canada, on behalf of Traveltomtom. Check out more from her trip in the US and Canada: helicopter flight over the Niagara Falls, her stay in the Fairmont le Chateau Frontenac in Quebec or the amazing Arowhon Pines Resort surround by nature vibes only.

5 Reasons to Visit South Limburg | Who said The Netherlands is flat?