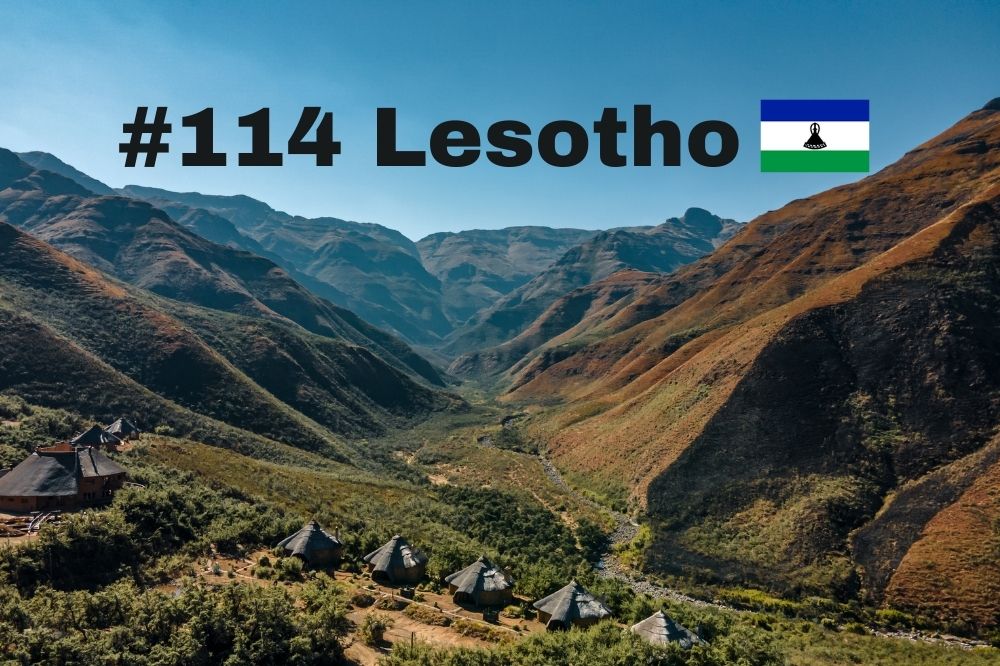 A step back in time, but a great one! Lesotho travel is still super authentic and life out there in world's highest country is extremely laid back. The scenery is absolutely amazing and the people very friendly and happy to see tourists. Visiting Lesotho was a big surprise.

Little did I know about Lesotho before my visit. I knew that it was mountainous, but I had no clue that the lowest point of the country is at 1,400 m (4,593 ft.). Which makes it by far the highest country on earth, followed by Rwanda with a lowest point of 950 m (3,116 ft). 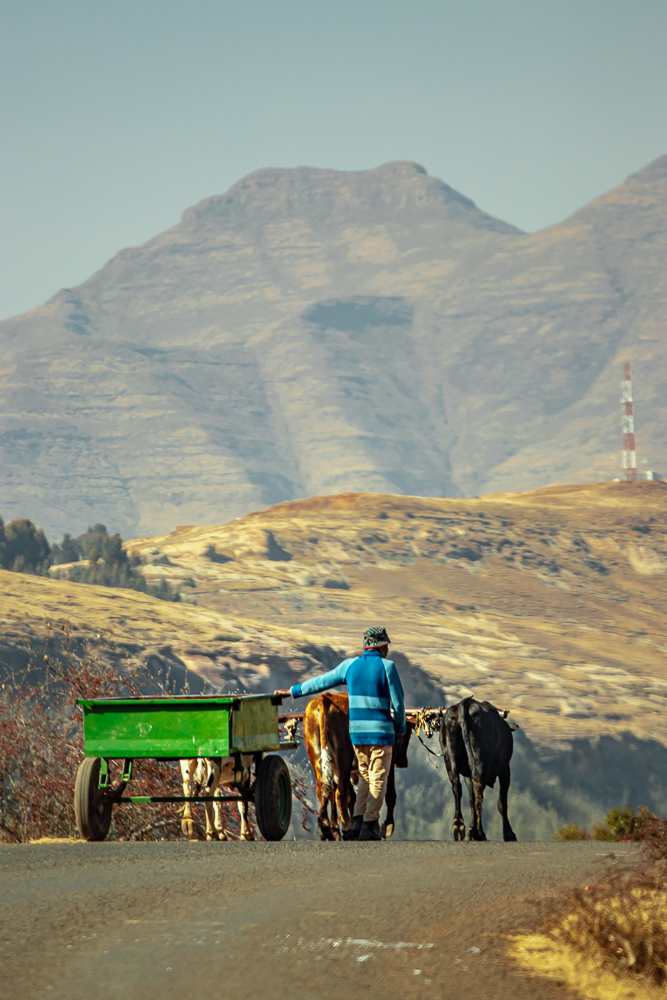 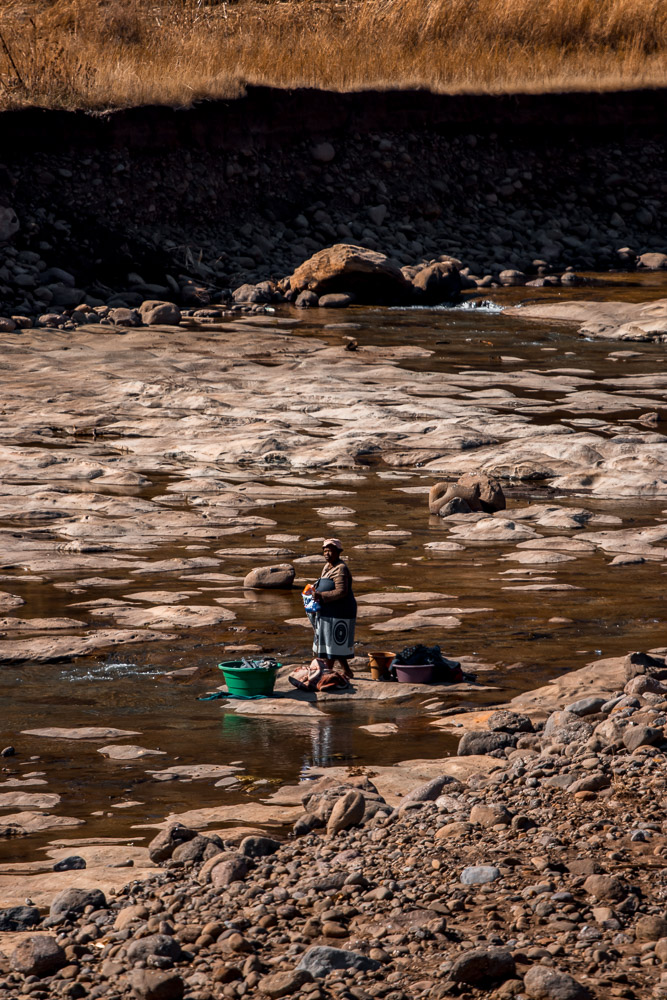 From Istanbul I flew to Johannesburg mid July 2021, right at the height of the riots in Johannesburg and Durban. The country went in very strict lockdown just a couple days before and riots broke out. Several shopping malls were set on fire, looting, shootings between police and protesters and many reported casualties.

It wasn’t the best time to fly into Johannesburg, people said the country was on fire! My plan was to rent a car at the Johannesburg Airport and drive straight towards Lesotho, a 4 hour drive. The news was of course not fake, but the reported riots, looting and shootings were very local. Upon arrival at the airport I rented a car and without any problems I arrived in Lesotho a couple hours later. 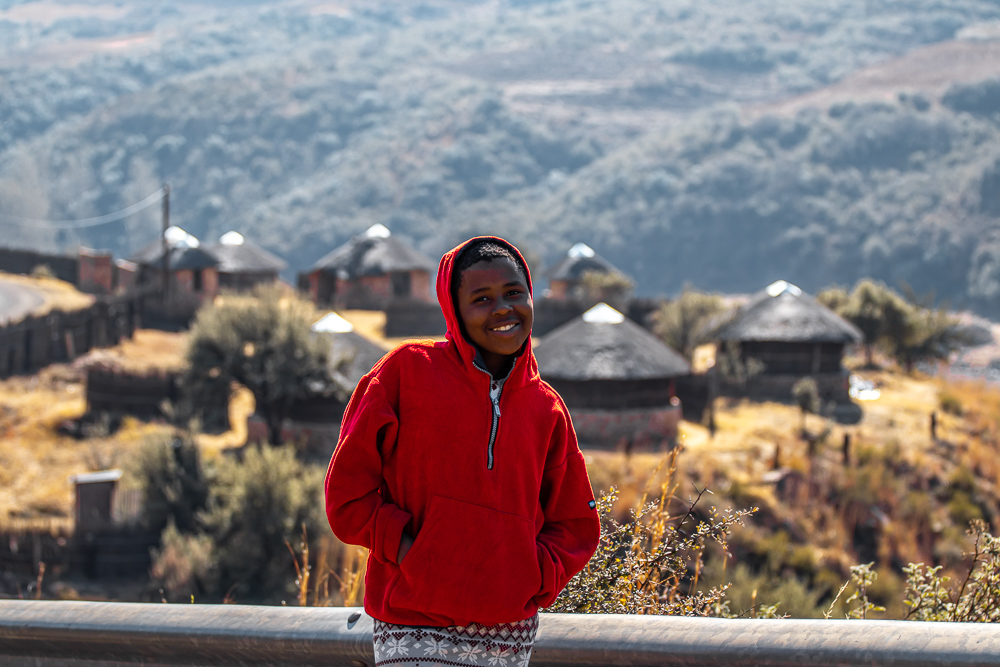 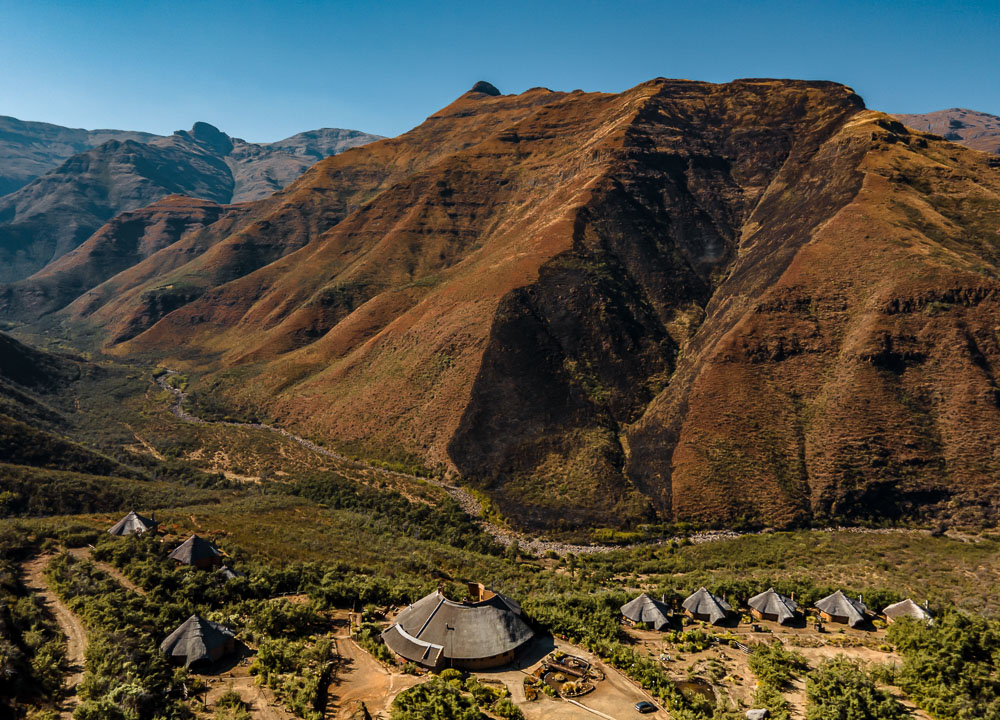 When traveling to Lesotho this is a must see. Don’t miss out on the Tsehlanyane National Park, a gorgeous valley and a hikers paradise. The reason I ended up there was the fabulous Maliba Mountain Lodge, the only 5 star hotel in Lesotho as they claim. 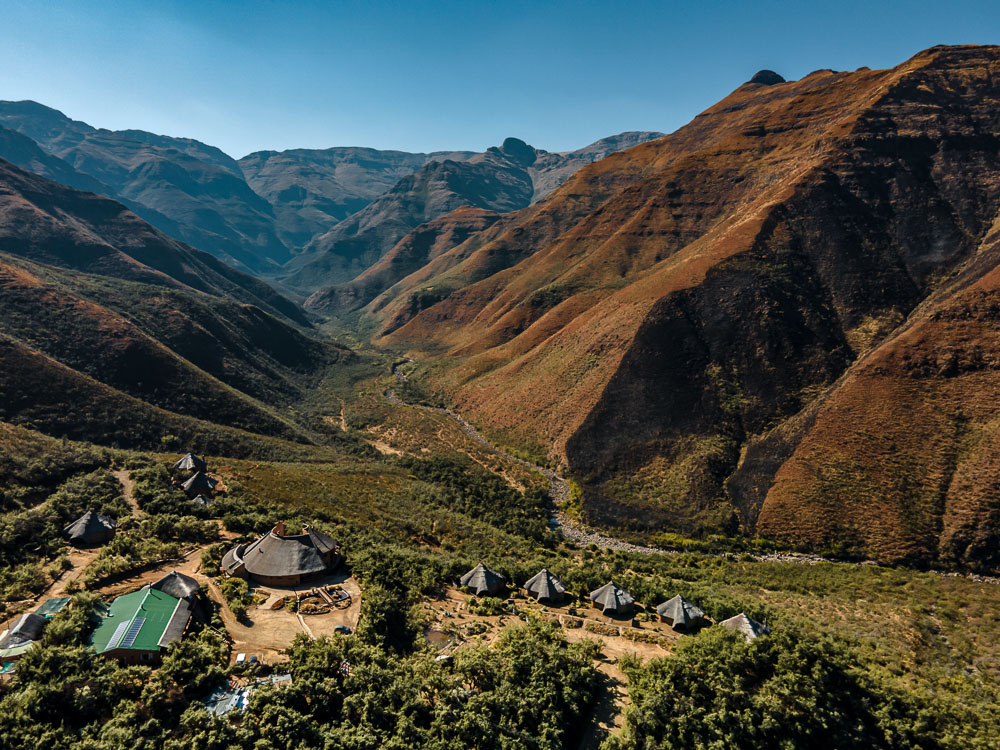 I found this place on the internet looking for unique places to visit in Lesotho and without a doubt this was the highlight of my trip to Lesotho. The rooms on the internet are very expensive but I also read somewhere that you could get a cheaper option for around $100 per night, including breakfast. 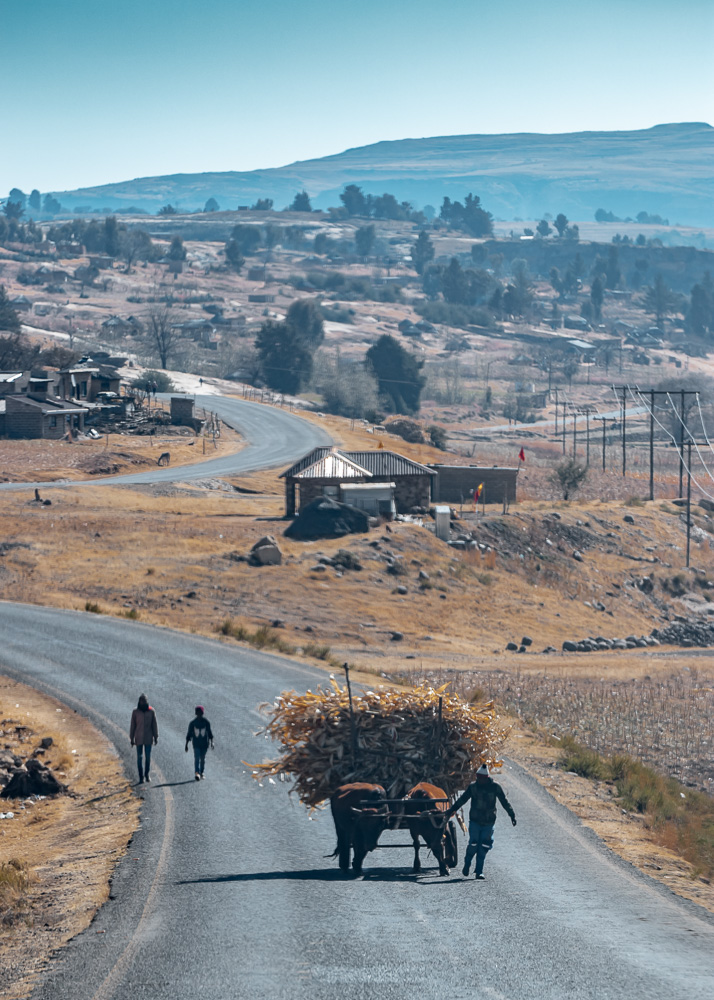 I decided to wing it and drove up a 80 kilometer dead end road to see what it was like. Along the way I got a feel of how rural the country is like and how life seemed to have stood still for many years. The roads were good, but keep an eye out for the speed bumps, which are not sign posted.

There is a lot of things going on on both sides of the roads: horses, donkeys, herders with sheep, goats, kids and local people walking from one village to the other. On top of that the landscapes are fantastic. Road tripping in Lesotho is awesome! 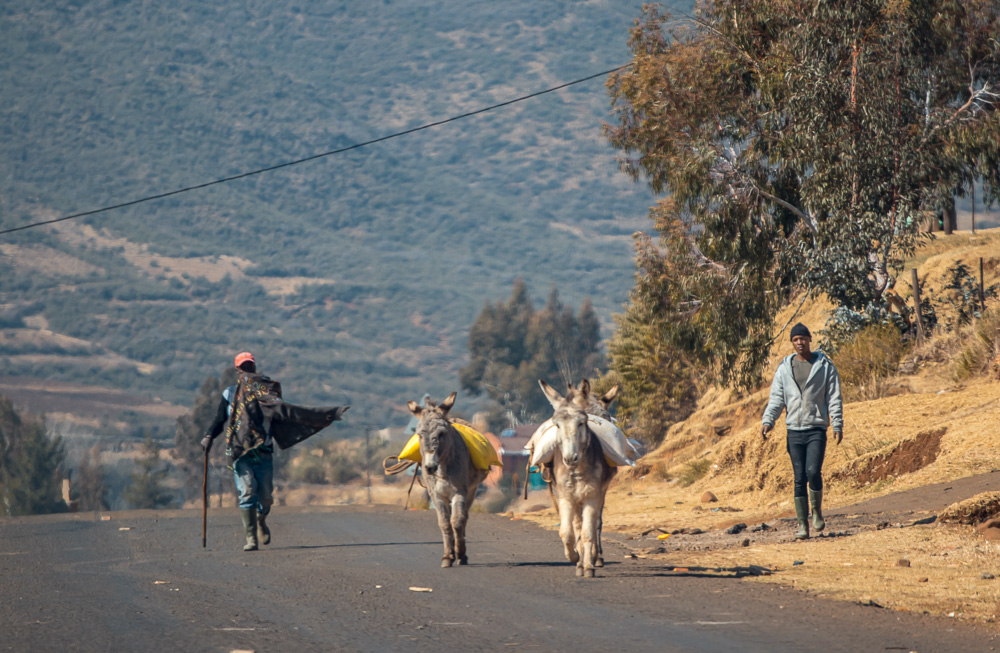 When I got closer to the lodge I learned that there was actually a National Park at the end of the road and that the Maliba Mountain Lodge was the only accommodation within the park. I had to pay entrance fee, but it was only like $5 or so. At the park entrance there is by the way another place to stay, much cheaper for around $40 per night, but also very basic.

I didn’t book one of the super luxurious but also expensive lodges ($250) at Maliba Lodge, but got myself a rather cramped but decent hotel room for around $100. 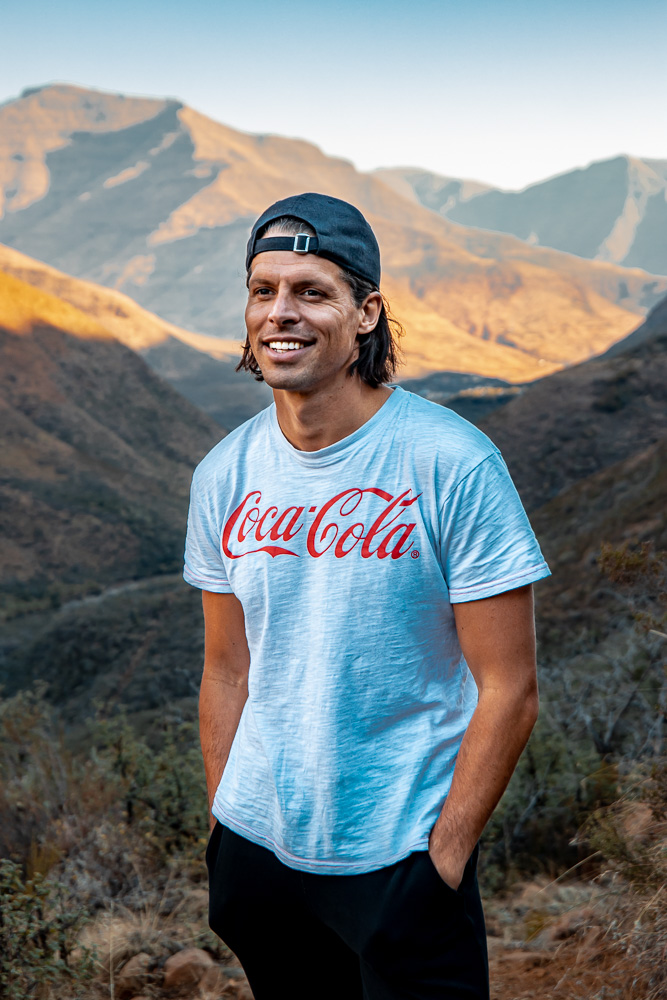 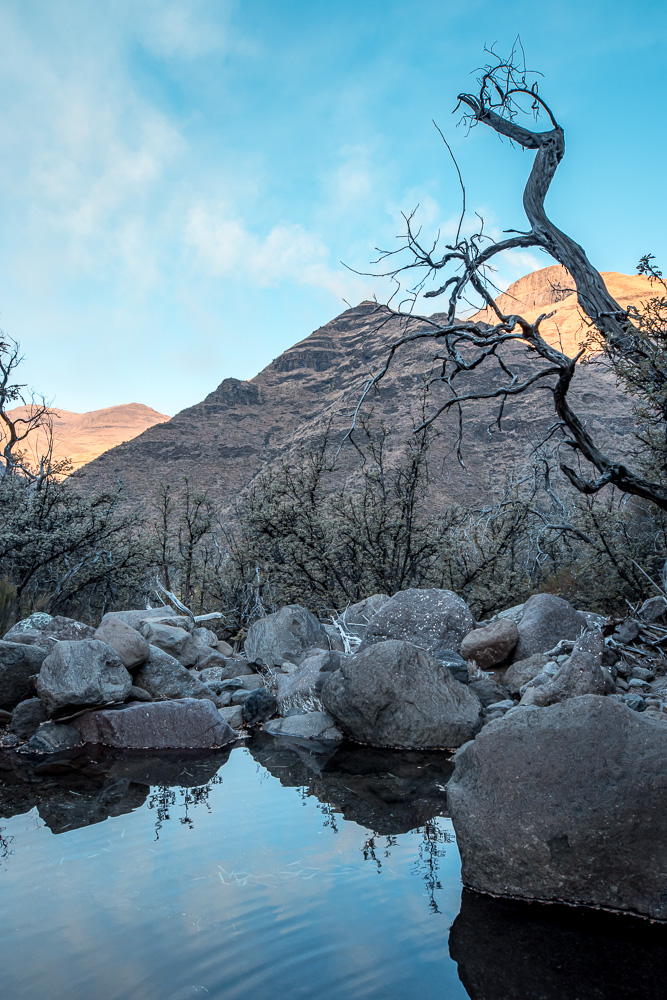 In the afternoon I went hiking on the high trail towards the River Pools and back on the lower trail. I passed several waterfalls, it was beautiful. The hiking trail was great and it took me about 3 hours to go and come back, I really loved hiking in the Tsehlanyane National Park. 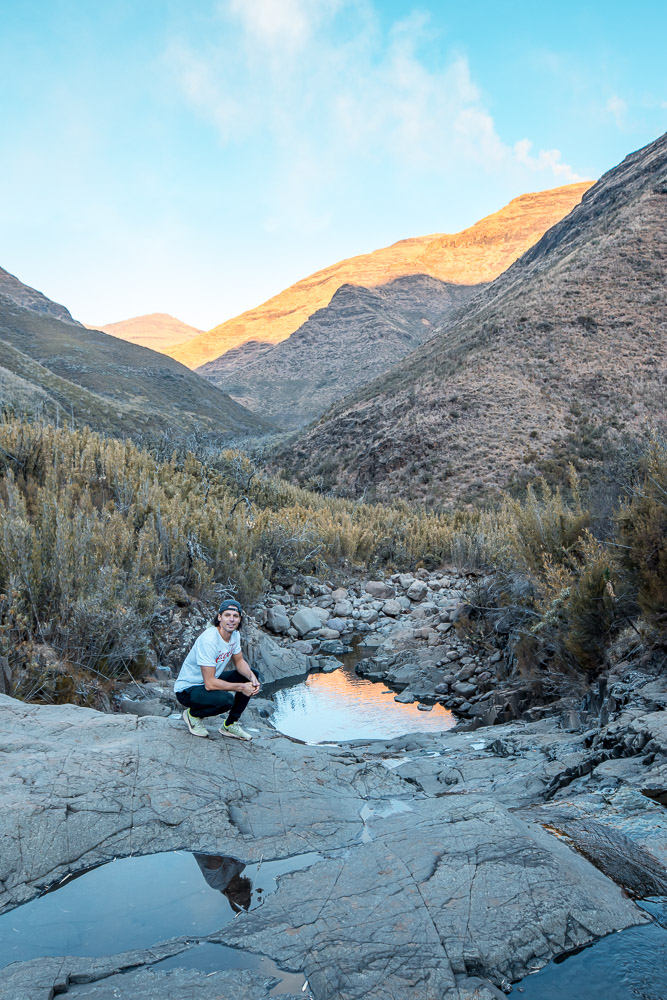 So much that I contemplated staying for another night at the Maliba Lodge. But after breakfast in the morning I decided to move on. 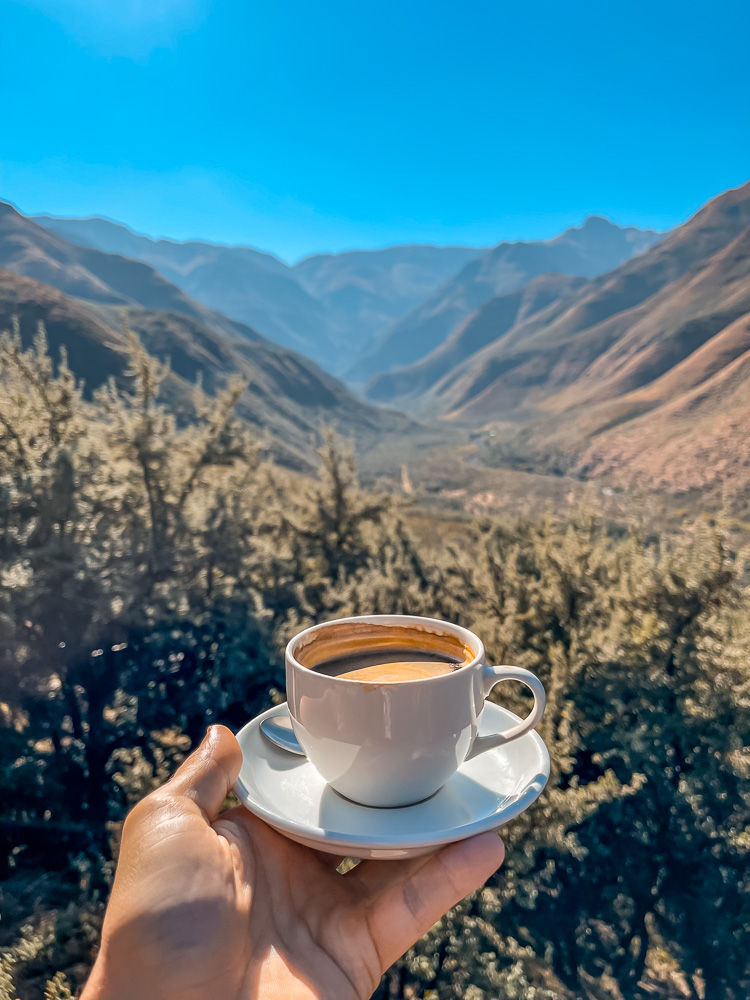 Visiting the Tsehlanyane National Park is one of the best things to do in Lesotho and I can totally recommend staying in the Mailba Mountain Lodge. 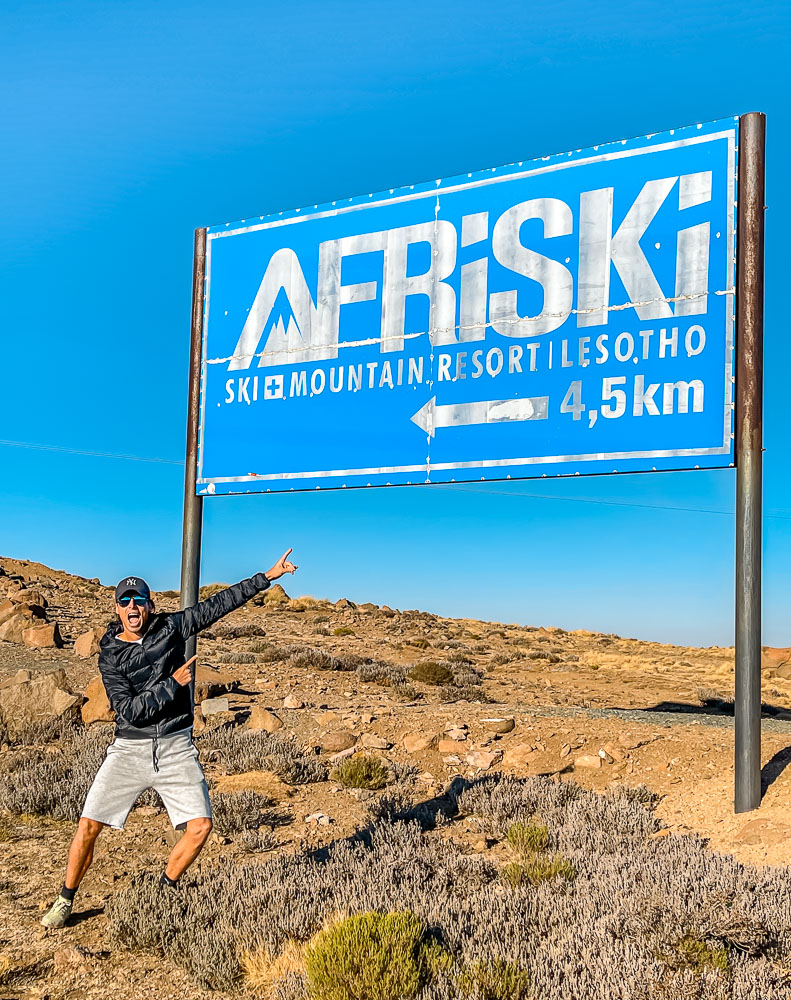 Live life with no regrets! It sounds so simple right, but as hard as some people scream they don’t regret anything in life, I don’t believe that. We can strive to have as little regrets as possible, but there will always be some things we wish we would have done different. One of them for me is Afriski!

I had the chance to go snowboarding in Africa, to actually stand on snow and slide down a mountain on this continent, but I didn’t! Why? First, I was a little short on time when I reached this Africa ski resort. Second, Afriski really isn’t much of a ski resort, but just one slope. 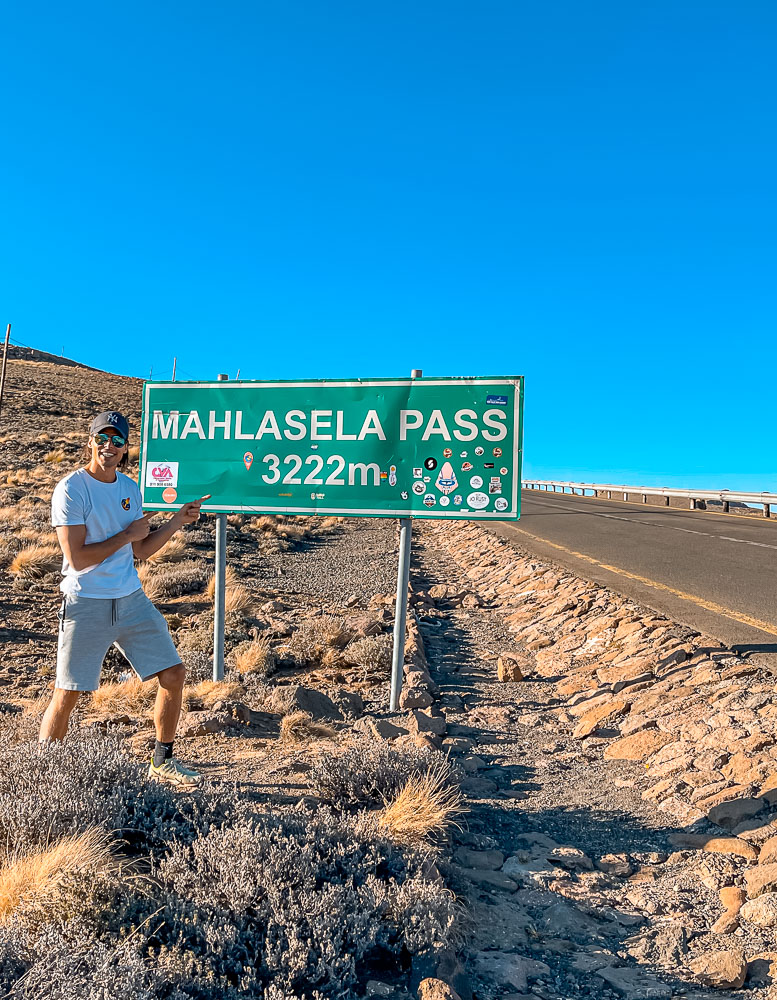 Making my way through the spectacular mountain roads of Lesotho I saw the signs of Afriski, one of the 2 only ski resorts in Africa. I was very curious how it would look like, as I was passing one of the highest points in Lesotho and there was no snow. But when I got my first glimpse of Afriski I had to laugh. 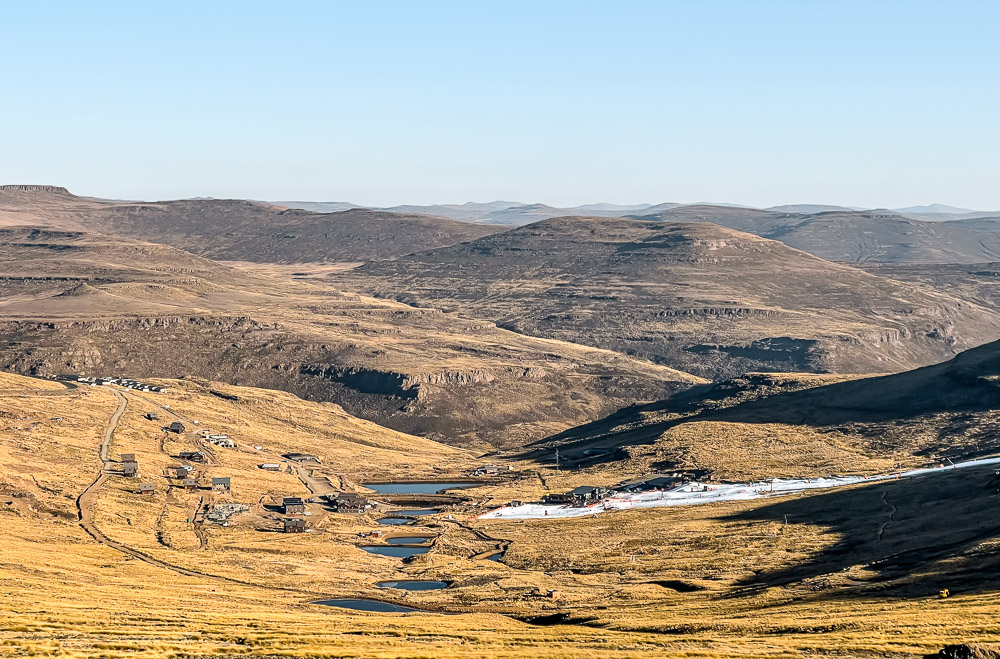 Afriski is the smallest ski resort I have ever seen, but it looks cool. I should have just done it for the experience, but damn it. I missed a chance to ski in Africa. Sorry Lesotho! 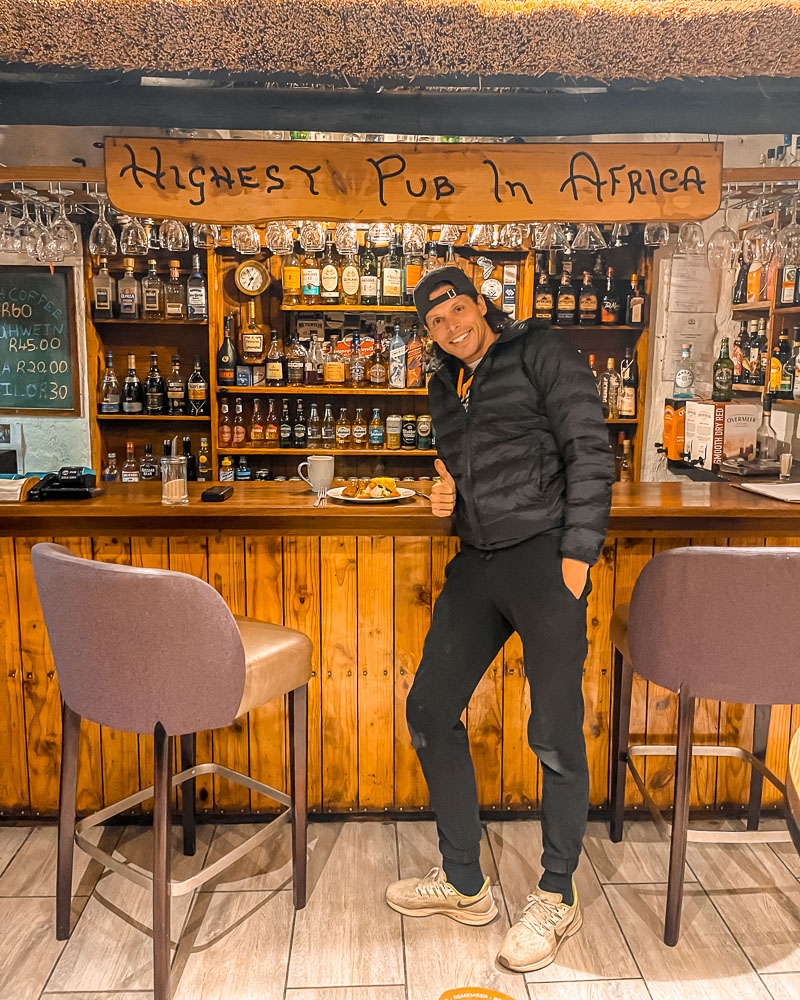 I continued my way towards the Sani Pass as I heard it was one of the best places to visit in Lesotho and at the end of the pass you can find the iconic place: the Highest Pub in Africa!

The highest pub in Africa was also going to be my end station in Lesotho as it is located right on the border with South Africa. I planned to stay overnight here and the next morning cross the border and drive down the Sani Pass on the South Africa side. Things went a little different… 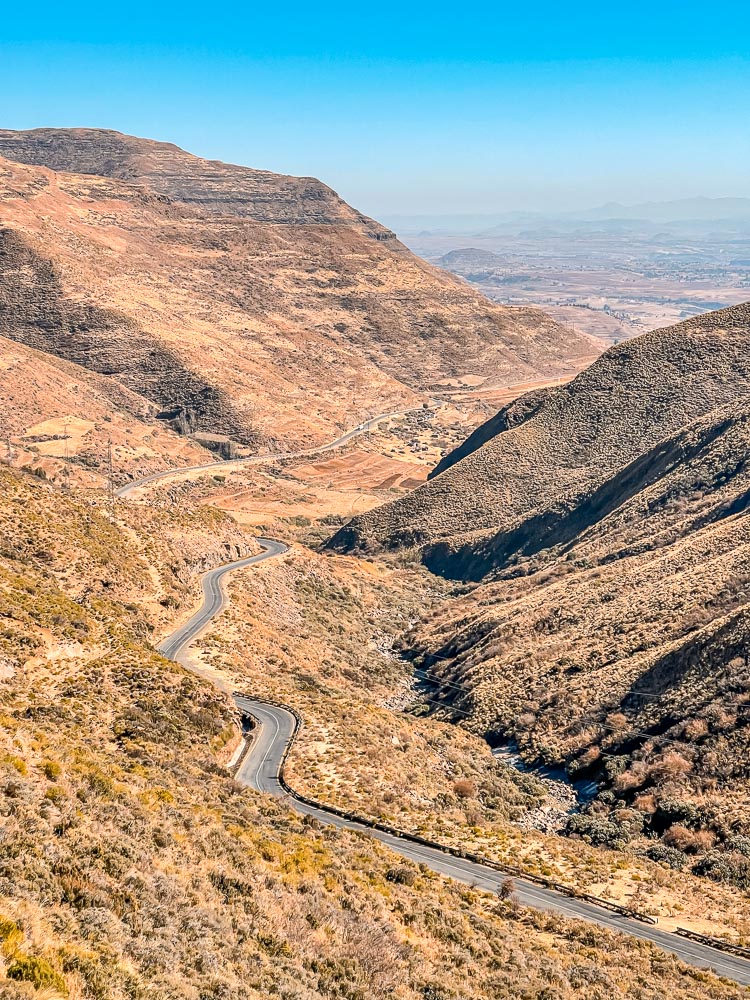 It took me much longer than expected, probably because I stopped too many time to admire the incredible views of the mountain roads and the Sani Pass. It truly is one of the best places to visit in Lesotho, but also a little off the beaten track. It is located all the way in the southeast corner of the country.

Once I arrived it was already dark and cold. It was about 8.00 pm and the temperature dropped below freezing level. Kind of makes sense because the highest pub in Africa is located on 2,874 m (9,429 ft) and it was winter in Southern Africa.

There was no one around apart from the very friendly lodge manager who actually opened the bar for me and offered me a tea, started the fireplace and prepared me a meal. He was a legend, but he also had bad news for me:

“With your car it is impossible to drive down the Sani Pass on the South Africa side”, he said to me. No chance, only 4x4 cars can pass!

NO WAY! For real? The nearest border crossing was driving back about 4 hours where I just came from that morning.

The friendly man was so convincing that I decided to go with his advice and cancelled my plan to cross the border at the Sani pass. After I finished my meal I got back in my car and drove back on the beautiful mountain roads of the Sani Pass on the Lesotho side (fantastic road conditions) during the night until around midnight I crashed somewhere in a random town. 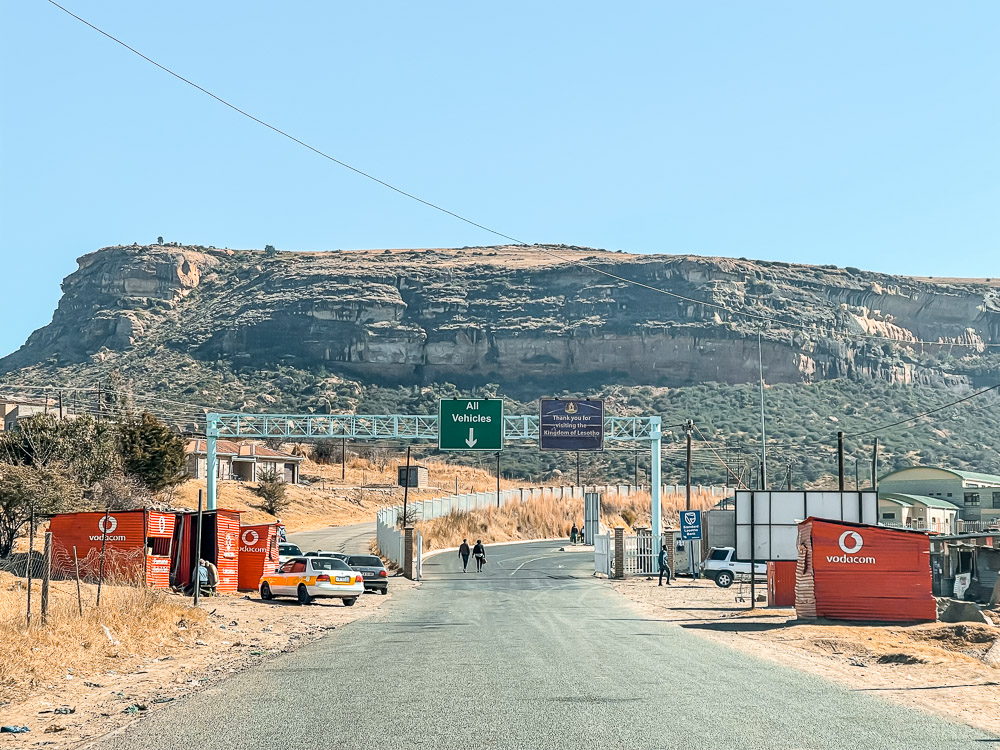 After a short night I continued my way and reached the Lesotho - South Africa Border at Calendonspoort again, the same border crossing that I used to enter Lesotho.

In total I spent 3 nights in Lesotho. The country was a big surprise in terms of its utterly stunning landscapes, gorgeous mountain roads and friendly people. Of course it was winter and it was very quiet on the road, but road tripping in Lesotho is totally recommended. Because of Lesothos high altitudes, temperatures during the day were very mild, but in the evenings it got VERY cold, up to -10 degrees. So cold that the shower in the morning wasn’t working, because the pipes were frozen.

However, after like 10.00 am it gets very pleasant in the sun. I would definitely not say no to traveling to Lesotho in winter.

Thank you Lesotho, you came as a big surprise! 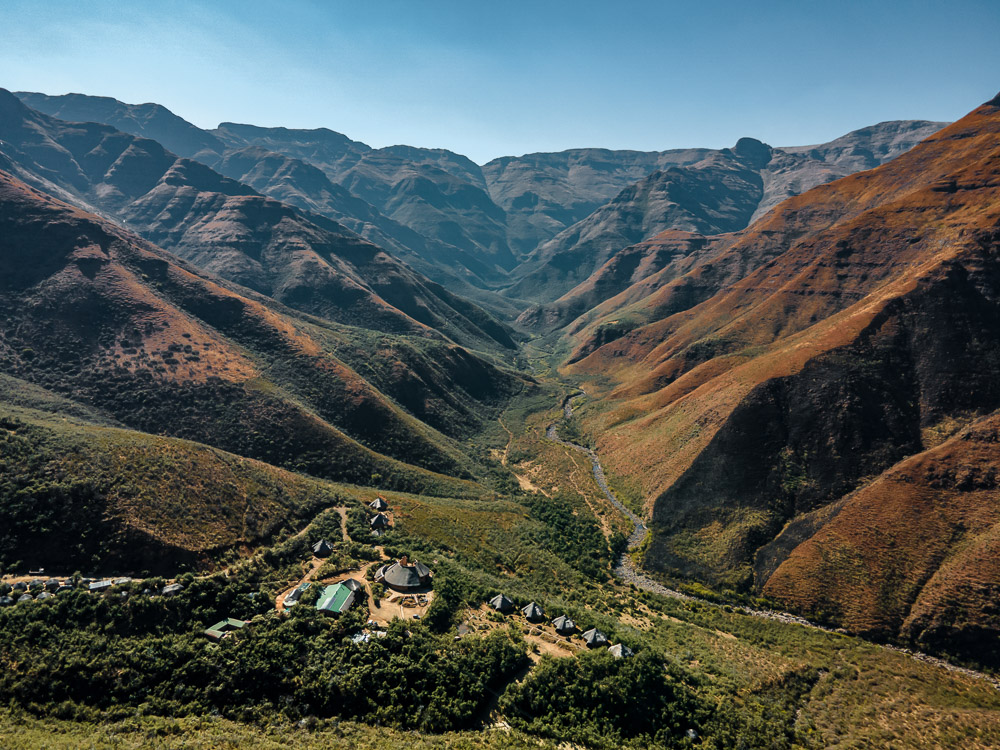 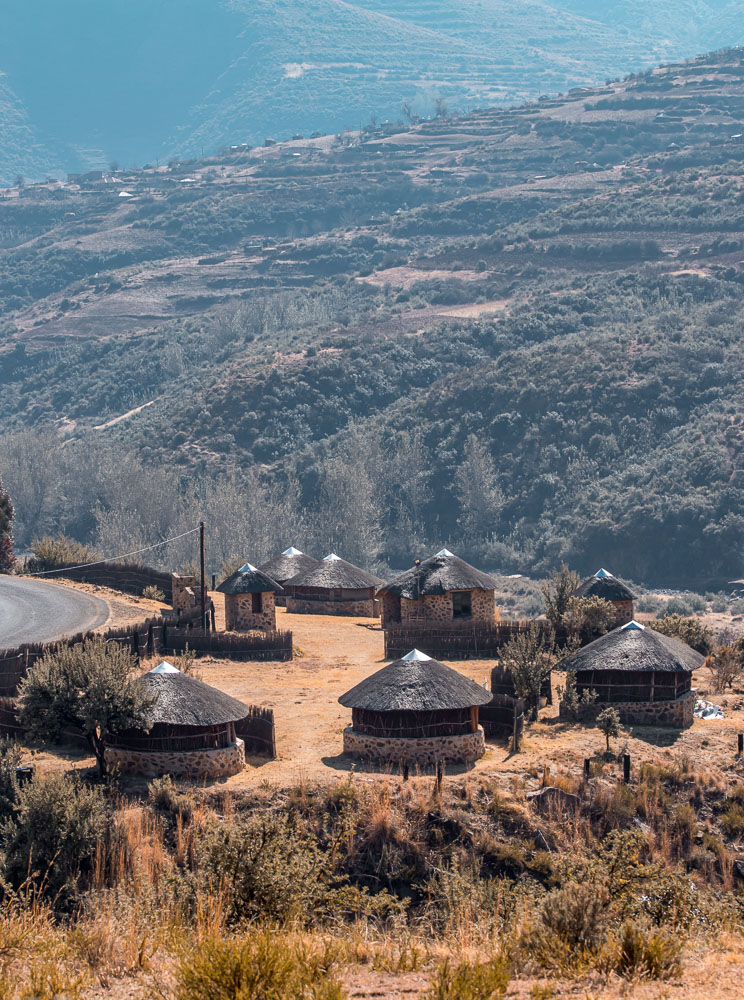 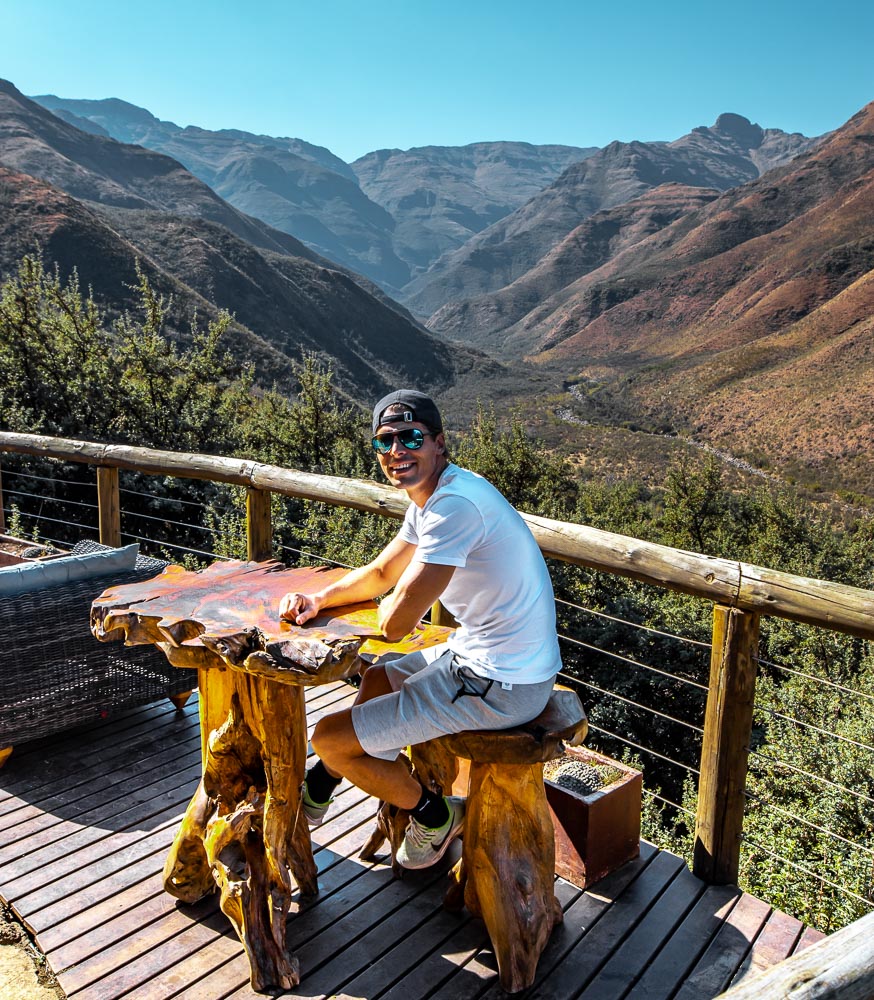 Buying a Prepaid Sim Card in Lesotho in 2021

Buying a Sim Card in South Africa in 2021
Tweet